George Eric Newby became a famous and highly regarded travel writer after serving with commando special forces during World War II and the Special Air Service Regiment in the 1950s.

He was born in London and educated at St Paul’s School. In 1938, two years after leaving school, he joined the four-masted Finnish barque Moshulu as an apprentice and sailed on the 30,000 mile round trip grain route from Australia to Europe by way of Cape Horn.

Newby was granted an emergency commission with The Black Watch (Royal Highland Regiment) in October 1940. He then joined M Detachment, Special Boat Service, around the time the SBS began its association with David Stirling’s SAS detachment.

In June 1942, Newby formed part of a small section which went to Syria to reconnoitre beaches as preparation against the country’s possible occupation by German forces.

The following August members of M Detachment, including Newby, were sent on a perilous mission to blow up German aircraft at Catania, Sicily, in 1942. The mission was part of Operation Whynot, which was aimed at thwarting German air attacks on a crucial supply convoy bound for Malta.

Unfortunately, the airfield was so heavily guarded that the entire patrol was captured and Newby was then held as a PoW in Italy. He managed to escape into the Apennines after the Italian Armistice, with the assistance of his future wife Wanda, and was sheltered by Italians sympathisers for three months until he was recaptured in winter 1943.

Around the time of his demobilisation in 1945 he was belatedly nominated for a gallantry award, in recognition of his efforts on the Sicilian raid. The original recommendation was for a Mention in Despatches (see citation); however, the award was subsequently confirmed as a Military Cross in the London Gazette in April 1946 while Newby was working for MI9.

Newby’s work with MI9 enabled him to return to Italy and he married Wanda Skof in the Bardi Chapel of the Church of Santa Croce, Florence, in 1946.

After the war he spent ten years in the women's fashion trade, first with his father's dressmaking firm and then in a London couture house.

In 1950 he was commissioned into 21 Special Air Service Regiment, a Territorial Army unit, then part of 16th Airborne Division.

He resumed his independent travelling career with an arduous trek through remote parts of Afghanistan, which resulted in his widely acclaimed book ‘A Short Walk in the Hindu Kush’.

He is the author of a number of bestselling travel books, including Slowly Down the Ganges, A Small Place in Italy, Departures and Arrivals, and two books of photographs: What the Traveller Saw and Around the World in Eighty Years.

Eric Newby was appointed a CBE in 1994 and was a Fellow of the Royal Society of Literature and of the Royal Geographic Society.

Further reading:
Love and War in the Apennines by Eric Newby published by Harper Press ISBN 9780007903665
"Perhaps his best and most original book…. The book is studded with exquisite descriptions of weather and landscape, notably an epic climb to the high point of the range.” The Daily Telegraph

Eric Newby, who died on Friday aged 86, was the author of some of the best books in the canon of English travel writing, notably A Short Walk in the Hindu Kush and Love and War in the Apennines. 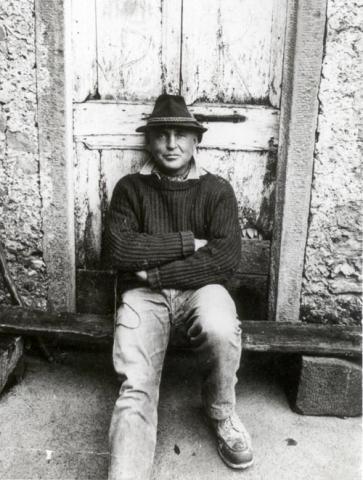