He was granted an emergency commission with the Royal Corps of Signals on 16 March 1943 and later volunteered for airborne forces.

Lt Crawford qualified as a military parachutist on course 138, which ran at RAF Ringway from 16 to 28 October 1944.

For Operation Varsity, the Rhine crossing into Germany, he served as the Officer Commanding K Section, which maintained signal communications for the 5th Parachute Brigade.

Lt Crawford emplaned at 07.45 hrs on 24 March 1945, landing just to the west of Hamminkeln. His signal section lost a considerable amount of its equipment on or soon after landing due to enemy action and Lieutenant Crawford was killed by shell fire at the rendezvous point around 10:50 hours.. 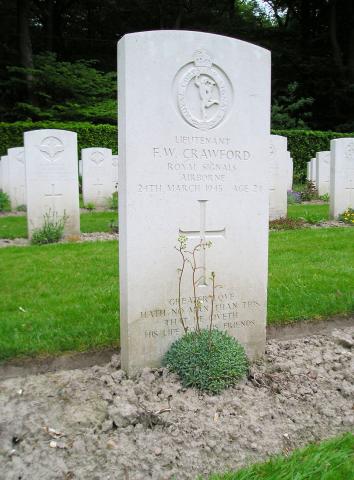