The son of Mr and Mrs C R Ashby of Apethorpe Lodge, Frederick Turrall Ashby was at Stamford School for eight years, latterly as head prefect. He entered London University on leaving school, where he gained his BA degree, and subsequently spent a year at Leeds University, which he left to enter the Army.

He initially joined The Royal Artillery, Coastal Defence and Anti-Aircraft Branch (Army Number: 1544242), sometime before 1940 and became a Physical Training Instructor. He was soon promoted through the ranks and by 1942 was a Sergeant Major in the Army Physical Training Corps. In this year he volunteered for Airborne Forces and was sent on parachute course 23 at RAF Ringway in August 1942. In early 1943 he was sent to 163 Officer Cadet Training Unit at Heysham.

In April – May 1943 he sailed for North Africa with the rest of the 2nd Parachute Brigade as part of the build-up of the 1st Airborne Division in the Mediterranean Theatre of operations.

He took part in the invasion of Southern Italy by landing at Taranto in September 1943.

On 1 June 1944 he took part in Operation ‘Hasty’, a mission to delay the withdrawal of German Forces from the area of Rome to the Gothic Line.

On 7 December 1944 it was announced in the London Gazette that he had been awarded the Military Cross.

On 1 June, Lieut. Ashby was a member of a parachute force dropped near Avezzano behind enemy lines, with orders to operate on the road Sora-Avenzzano and force the enemy to withdraw with such speed as to be unable to implement their demolition plans. The enemy re-acted quickly and attacked the party on 2 June, but Lieut. Ashby managed to disengage and succeeded in mining the road that night. By the night 2 June Ashby again reached the road and attacked the German convoy, two vehicles and passengers being destroyed. The area was now full of Germans and Lieut. Ashby found that he was unable to reach supplies dropped to him. The advance of the Allied relieving troops had, moreover, stopped and he had no wireless. Lieut. Ashby kept his party together and continued to operate until picking up a leaflet dropped by Allied aircraft ordering him to return on 7 June. Lieut. Ashby showed himself to be a most determined and courageous fighter not to be deterred from his objective. He returned with his complete party except for one man killed and three captured. 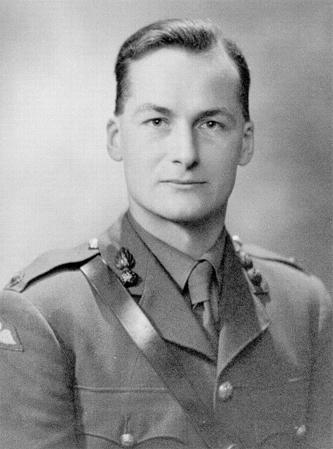