Corporal Fear volunteered for airborne forces and undertook Parachute Training Course 57 at RAF Ringway between 22 March and 11 April 1943. His course report stated that he was ‘Reliable. A good Parachutist.’

He was posted to 4th Parachute Battalion and served in Italy, on Operation Dragoon in the South of France and Operation Manna in Greece.

Corporal Fear received a gunshot wound to his right leg on 5 December 1944 and was Killed in Action eight days later on 13 December 1944.

He is now buried at Phaleron War Cemetery, Greece. 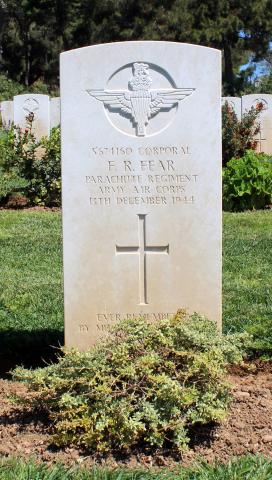