Lieutenant General Frederick Arthur Montague Browning was very much the father of the Airborne Forces in Britain.

Lieutenant-General Browning began his military career in the First World War, where he served with the Grenadier Guards and won the Distinguished Service Order and the Croix de Guerre. He also had the honour of meeting Winston Churchill, with whom he shared a dugout in 1916.

He spent a while as Adjutant at the Royal Military College, Sandhurst, where he was the first Adjutant, during the Sovereign’s Parade of 1926, to ride his horse ‘The Vicar’ up the steps of Old College and to dismount in the Grand Entrance. There is no satisfactory explanation for why he did it, but it is a tradition which endures to this day. (A ramp has to be provided for the horse to return, since horses are incapable of going down steps).

At the 1928 Winter Olympics in St. Moritz, Switzerland he was a member of the British bobsleigh team. His team Great Britain II finished tenth in the five man competition.

Promotion to Lieutenant-Colonel followed in 1935, in the same year he became the Commanding Officer of the 2nd Battalion, Grenadier Guards. He held that position until about the time of the outbreak of World War II, when he became Commandant of the Small Arms School as a Brigadier.

In 1940, he was given command of the 24th Guards Brigade, and then in October 1941 Churchill, who had by then had become Prime Minister, appointed him as commander of the 1st Airborne Division and he was promoted to the rank of Major-General. Browning was able to make good progress in raising the Division, using his political and administrative skills to manipulate the British military establishment. It was also a difficult time to be in command of such a unit as the airborne movement had only just been started in Britain, and as such it was far from easy to convince people of the benefits of such troops, who were as yet untried in battle. Browning, who was also a qualified glider pilot, did much to create the image of the British Airborne Forces, having decided in the summer of 1942 that airborne troops ought to possess their own form of defining headwear, as opposed to the tradition of men wearing the berets of their former units. It has been said that his wife, the author Daphne du Maurier, had chosen the colour of maroon, however this oft perpetuated ‘myth’ is false and the decision was made by Browning himself. Browning did, however, assign the artist, Major Edward Seago, to design an emblem for the airborne forces. The result was the famous insignia, taken from Ancient Greek myth, of the warrior Bellerophon riding Pegasus, the winged horse.

The maroon beret was the only indication about Browning’s person to confirm that he actually was an airborne officer. He had designed his own uniform, made of barathea with a false Uhlan-style front, incorporating a zip opening at the neck to reveal regulation shirt and tie, and worn with medal ribbons, collar patches, and rank badges, capped off with grey kid gloves, and a highly polished Guards-style ‘Sam Browne’ belt and swagger stick. It was a uniform that he wore during Market Garden and, as was his raison d’etre, he was always immaculately turned out, regardless of the time or occasion. In 1941, while inspecting the 2nd Battalion’s C Company, who had experienced a number of difficulties in obtaining replacements for their battered clothing, Browning took his time and talked with almost every man, but at the end he turned to the then Major John Frost and said “I think you’ve got a good lot of men but I have never seen such a dirty company in all my life!”. Browning had not seen action during the Second World War, and was very keen to do so before it ended. Ever devoted to the care and attention of the men under his command, he was liked and admired by them, though few were allowed to form a close connection.

He held the position of Commander 1st Airborne Division throughout the unit’s fighting in North Africa. In April 1943, Browning left the 1st Airborne Division to become Airborne Advisor to Supreme Commander Eisenhower, and it was at this post that he oversaw the planning of the airborne assault on Sicily. Relinquishing command of the Division on the 6 May 1943, he was promoted Lieutenant General in December of that year and assigned to HQ Airborne Forces in Britain. On the 16 April 1944, he became commander of the 1st Airborne Corps. The corps became part of the First Allied Airborne Army, commanded by US Lieutenant-General Lewis H Brereton, when it was organized in August 1944. While retaining command of the British Airborne Corps, Browning also became Deputy Commander of the Army.

1st Airborne Corps commanded the airborne forces committed during Operation Market Garden. Browning landed with a Tactical Headquarters near Nijmegen but found it difficult to command the troops due to communications failures and their geographical separation. His use of 36 aircraft to move his Corps Headquarters on the first lift has been criticised; the number of combat troops on the first lift was already restricted due to a decision not to make two drops on the first day. The US General James M. Gavin, commanding the US 82nd Airborne Division, was also highly critical of Browning, writing in his diary on September 6, 1944 that he “...unquestionably lacks the standing, influence and judgment that comes from a proper troop experience....his staff was superficial...Why the British units fumble along...becomes more and more apparent. Their tops lack the knowhow, never do they get down into the dirt and learn the hard way.”

After the battle Browning’s critical evaluation of the contribution of Polish forces led to the removal of Polish Brigadier-General Stanisław Sosabowski as the commanding officer of the Polish 1st Independent Parachute Brigade.

In the film ‘A Bridge Too Far’, based on the events of Operation Market Garden, Browning was portrayed by Dirk Bogarde.

Although Field Marshal Montgomery attached no blame to Browning for the failure of Operation Market Garden, he received no further promotion. He subsequently became Chief of Staff to Lord Mountbatten, Commander-in-Chief of the South East Asia Command. His predecessor in that post, Lieutenant General Pownall, acerbically described Browning as ‘rather nervy and highly strung’. Browning remained in South East Asia until the end of the war.

His last major military post was as Military Secretary of the War Office, 1946-1948. From 1948 to 1952 he was Comptroller and Treasurer to Her Royal Highness the Princess Elizabeth Duchess of Edinburgh (later Queen Elizabeth II), and from 1952 to 1959 he was Treasurer to the Duke of Edinburgh.

From 1944 to 1962 he was Commodore of the Royal Fowey Yacht Club, and subsequently was elected its first Admiral.

Browning married novelist Daphne du Maurier in 1932, with his wife becoming initially Mrs Browning and then Lady Browning when her husband was awarded a knighthood in 1946. One of their daughters, Tessa, married David Bernard Montgomery, 2nd Viscount Montgomery of Alamein, son of Field Marshal Montgomery.

His cousin was the broadcaster and cricket commentator Brian Johnston. 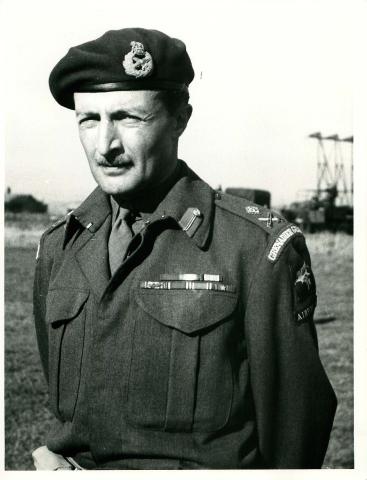