Frederick Herbert Orme was the son of Albert and Louisa Orme, of Smethwick, Staffordshire.

He served in The Devonshire Regiment prior to volunteering for airborne forces while deployed in the Middle East and subsequently joined B Company, 10th Parachute Battalion, which formed part of 4th Parachute Brigade.

B Coy, 10th Para Bn, was ordered to mount a fighting patrol, which moved into Gioia del Colle on dawn of 16 September 1943, resulting in a five hour battle, after which B Coy returned to the battalion area. Several casualties resulted from this fighting, including Pte Orme and his friend Pte Bill Tucker, who had also served in the Devons prior to joining the 10th Para Bn.

The aggressive nature of this fighting patrol resulted in the Germans withdrawing from Gioia de Colle on the night of 16/17 September.

Pte Frederick Orme died on 16 September 1943, aged 29 years, and was initially provided a field burial at Gioia. He was later reburied at Bari War Cemetery on 12 May 1944. 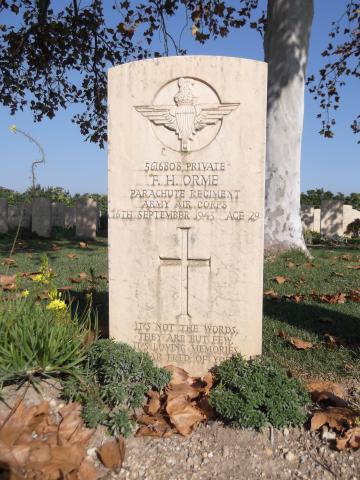