Frederick George Shedd was born in Buckingham on 3 October 1924. He attended The Royal Latin School in the town and on leaving joined his father at the RDC Offices as a clerk there. He enlisted at the age of 18 years on 17 June 1943, and then volunteered for The Parachute Regiment.

Fred attended parachute training course number 99 at RAF Ringway between 19 January and 3 February 1944. From his letters home and other papers, photographs and documents, kept by his Mother and passed down through the family, there is a complete record of his war service and subsequent capture as a POW.

Fred was stationed in Spalding prior to participating in Operation Market Garden in September 1944 when he was dropped on Arnhem. His personal account of this mission and subsequent capture was filmed in 1993 when Fred attended the commemorations at Arnhem for the first time since the war. He remembers the drop zone, encountering enemy resistance, then being taken by the Germans. He was reported missing ‘somewhere in NW Europe’ on 25 September 1944. On being captured Fred was sent first to a transit camp, Stalag X11 A, then to Stalag X1 B, deeper into Germany. By all accounts he was fortunate to have been in this camp as it was taken over by a British Officer who ensured that everything was run effectively [actually RSM Lord]

Fred’s original records include a Post Card filled in by all troops prior to Operation Market Garden, stating that their forwarding address would be BLA (British Liberation Army), the only known copy in existence, official ‘missing person’ notification, first Post Card stating he was alive and well from POW camp, then more Post Cards and letters at intervals from the camp. The last letter from Holdersheim on April 15 1945 describes the joy at being liberated telling his parents that the ‘Yanks’ had come last Wednesday and that they were free men again.

Fred and his colleagues were repatriated 19 April 1945. Fred remained in the service and worked as a Clerk in Ilfracombe, Devon, until he was demobbed on the 2 July 1947. During this time he met and married Vera Mair, a girl from Aberdeen who had served in the ATS as an enemy plane spotter on an Ack Ack station in the Thames estuary.

Fred and Vera came back to Buckingham after the war and settled there, Fred resuming his work as a clerk at the RDC Offices in the town. Their only child, Gillian, was born in May 1948. Fred was a quiet, thoughtful and gentle man, leading a life very remote from that of a soldier. During the 1950s and 1960s he changed jobs and was Office Manager at Plessey Electronics works in Towcester, Northants.

In the 1970s a Dutch film company contacted Fred as they were looking for a veteran parachutist who had not been back to Arnhem since the war. The film of Fred’s reminiscences and visit to the 49th Anniversary Commemorations, entitled ‘A Bridge to the Past’ was broadcast on Netherlands Television on the 50th Anniversary of the conflict. In later years, after the death of his wife, Fred moved into the home of devoted friends and lived peacefully until his death on 29 November 2013. 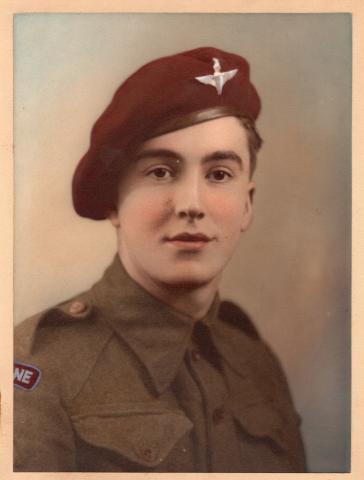