Fred, being from Liverpool, initially joined the Liverpool Scottish  territorial regiment in 1939 just prior to the outbreak of World War 2, having lied about his age to be able to join up.

Staying with the Liverpool Scottish until September 1942, until he volunteered for the airborne forces. Fred completed  parachute course 39 at RAF Ringway, 27 November to 6 December 1942. These recruits had formed up for their ground training and selection course at Hardwick Hall (near Chesterfield) on the 16 November. It was noted in the Parachute Jump Records that Fred was injured in the face during this training. After successfully completing his parachute jump course Fred was posted to the 5th Scottish Parachute Battalion.

He set sail for North Africa in the early part of 1943 where he was then posted to the 1st Parachute Battalion as part of the campaign in Tunisia. He sustained a number of injuries sustained, and a new posting saw Fred join the 2nd Parachute Battalion, where he was to take part in the attack on Sicily. Barrages of flack, including some from our own Royal Navy, saw a number of planes including Fred's take evasive action before returning to North Africa being unable to 'jump'.

As part of the 2nd Battalion he took part in the invasion of Italy and after advancing northwards, returned to England with the Battalion in December of 1943.

In 1944, whilst still part of the 2nd Battalion, Fred took part in Operation Market Garden and was again injured, quite severely. He was captured by the Germans on the early morning of the 21 September 1944 . He was successfully treated and was sent to a POW camp in Moosburg, Germany (Stalag VII A). His POW number was 14015. The camp was liberated in April of 1945 and Fred returned home to Liverpool and left the airborne forces in late 1945.

Fred eventually returned to the Liverpool Scottish territorial regiment, joining as a commissioned officer for a number of years in 1963. Fred, sadly passed away in 2010 leaving behind a very, very proud family.

Created with information and images kindly supplied by Robert Bromley. 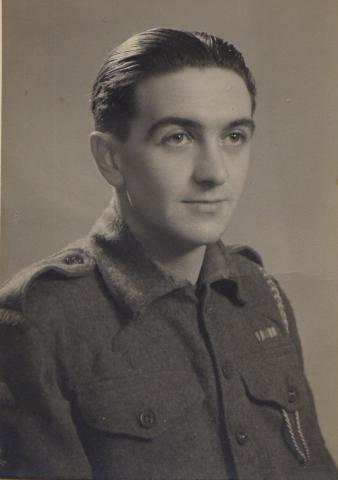