Trooper Freddie Brawn was the son of George Albert and Lily Brawn, of Chasetown, Staffordshire.

He qualified as a military parachutist on Course 112 which ran at RAF Ringway from 17 to 28 April 1944 and served as a wireless operator with 9 Section, C Troop, 1st Airborne Recce Squadron, Reconnaissance Corps.

Later that year, he took part in the Battle of Arnhem, during Operation Market Garden, and landed at Renkum Heath several miles west of Arnhem on Sunday 17 September.

Following the orders of the day on Tuesday morning, C Troop separated from the Recce Squadron to conduct a preliminary reconnaissance to the north of Wolfheze station, in the Reijerscamp area and it became apparent that they were in the midst of heavy German troop movements.

After a council of war it was decided to make a high speed dash back to Oosterbeek via the Amsterdamseweg and Wolfhezerweg.

The seven jeeps of C Troop ran into a German ambush, and a heavy burst of machine gun fire raked across the jeep carrying Freddie Brawn, killing him instantly.

Trooper Brawn died on 19 September 1944, aged 21 years old. He was initially given a field burial along the Amsterdamseweg and is now buried at Oosterbeek War Cemetery, Arnhem. 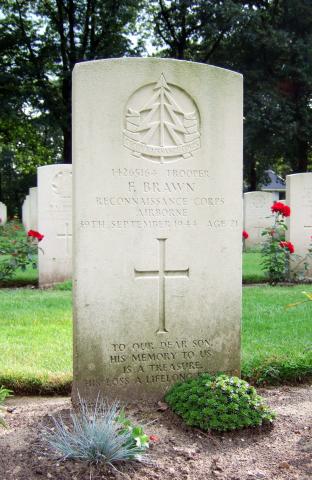