Fred was born in Victoria Barracks, Belfast as his father was a Royal Iniskilling Fusilier. He was the fifth of 9 children, Fred moved first to Egypt, and then to Sandhurst, following his father's career.

When war broke out in 1939, Fred’s life changed forever, three brothers were engaged in combat, while his father had to move away to train recruits.

So at 11 years old Fred became the man of the house, a role he relished. He kept rabbits and chickens to ensure the large family was well fed despite rationing. He cycled 13 miles to Grammar school every day, still finding time and energy to do his bit on a farm to 'dig for Victory,' as wartime posters appealed.  He also joined the Home Guard to spot and combat fires and help police blackout measures. One of the local potato fields was bombed and he remembered it raining potatoes, a harbinger of future summers at Elm Corner!

His younger brother John - still with us - remembers Fred as a father figure, teaching him bodybuilding, swimming and running army-style assault courses in preparation for the inevitable call up.

Fred couldn't wait to sign up and do his bit, and inspired by wartime newsreels he enlisted with the Berkshire Regiment in 1944. Shortly after he passed the brutal physical entrance requirements to get into the Parachute Regiment, which had formed three years before.

The first deployment was Hamburg in Germany. There, he saw a devastated city reduced to rubble and remembered being humbled by proud Germans who were left with nothing. The main activity was distributing humanitarian aid, which transitioned to patrolling the West German border against the encroaching Russians before the border zone was legally defined. Unable to fire a shot, for fear of the international fallout, disagreements with Russian troops on the ground were often settled with fists. That said, there were also some gun skirmishes, often between British forces and German communist factions.

The next stop in 1948 was Palestine. Minds fresh with the horrors of the Holocaust, Fred and his comrades disobeyed orders, to swim out to help Jewish refugees swimming from ships, including women with babies strapped to their backs.

He swiftly progressed through the ranks, within a year achieving corporal and shortly after Sergeant. There was the challenge he recalled, of leading men who had fought at Arnhem and other major battles during WW2. But as was the case throughout Fred’s later career, strength of character and his constant pursuit of excellence won him respect and acceptance.

In 1951 Fred was deployed to Egypt where he spent 3 years in the Sinai desert without a break.

Originally deployed for the security of the Suez canal zone, he complained he was kept waiting in the desert by indecisive politicians. This time was passed weightlifting, sketching portraits and growing plants outside his tent. When Fred heard his brother John was passing through the Suez Canal, he drove for 2 days through the Sinai desert to wave him off to the Korean war.

By 1956 Fred was conducting anti-EOKA counter-insurgency operations in Cyprus before 3 Para was returned to Egypt to conduct the last battalion parachute regiment assault under fire by British forces at El Gamil airfield during the Suez Crisis in November of the same year.

Fred was soldiering as the British were withdrawing from their empire in the Middle and the Far East, primarily with the 16th Parachute Brigade, part of Britain's strategic reserve. This took him to Jordan in 1958, and Aden and Radfan in 1961. While everyone was bopping to The Beatles “She Loves You" in Chelsea, Fred was skirmishing with insurgents in the Yemeni mountains and Radfan, or dodging rounds in downtown Aden.  He dined on one occasion with the king of Bahrain and visited Dubai, which then was no more than a small shantytown.

Fred did many anti-EOKA tours of Cyprus. He recalled the only music they had access to on the wireless was My Boy Lollipop, so truck loads of Para’s could be found singing along through the Troodos Mountains belting out this cheesy song!

He deployed many times to Borneo with 2 Para during the growing confrontation with Indonesia, leading 3 week jungle treks to pick up suspects for interrogation. This also involved hearts and minds missions with Iban tribespeople, delivering humanitarian aid. He was involved in counter sweeps after the bloody repulse of the Indonesian attack at Plaman Mapu in April 1965. Fred's typical response to SAS patrols seeking to 'help out' was “They couldn't find their way round a supermarket”. He developed and pioneered linear and area ambush skills during this period, which were included in teaching at the Parachute Regiment Battle School, set up apart from the rest of the army at Brecon, to train NCOs and young officers.

His CO Ted Eberhardie awarded him the MBE for his services in Borneo in 1966.

The 70s meant engaging in counter-insurgency closer to home in Northern Ireland, six tours in all. During downtime at the barracks, he built a greenhouse and nurtured fuschia and pelargoniums. The IRA appears to have had a problem with this and a bomb was thrown over the barrack wall which blew up Fred’s 'flower power' contribution to the campaign. The local newspaper described the event under the banner headline: “The Captain’s Blooms Go Boom!”.

Back to the Far East, Fred was with 2 Para jungle training in Malaya in 1975, when he decided to drive for 36 hours to find a phone at 'Raffles' in Singapore to propose to his then-girlfriend Audrey.

Fred was appointed the Quartermaster to the BAOR adventure training centre in the Harz mountains and his final appointment was QM 15 Para at Glasgow. He retired in 1983 and set up and ran a very successful market garden business in Gloucestershire until his death in 2021 aged 93. 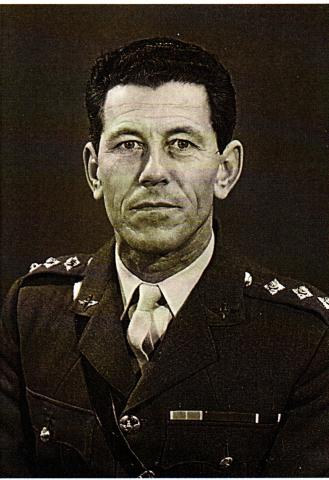