Frank Herbert Chesson enlisted into The East Kent (The Buffs) Regiment and was serving in the Middle East when he volunteered for airborne forces.

After undertaking parachute course K22 at Ramat David in 1943, he was posted to 4 Platoon, A Company, 10th Parachute Battalion.

Sgt Chesson was a section commander on ‘Operation Market-Garden’, jumping onto DZ Y at Ginkel Heath on Monday the 18 September 1944. His platoon commander, Lieutenant Patrick Mackey, was killed on the DZ as well as another section commander from 4 Platoon, Sergeant Frank Bennett, thus leaving the platoon under strength right from the start.

Sgt Chesson was killed at the junction of the Maasbergseweg and the Amstedamseweg on 19 September 1944, about 1000 yards west from a junction with Dreyensweg. Glider Pilot Sgt Huxley was also in the party of nine men. Although the exact circumstances are not known, the soldiers appear to have been ambushed as they passed the mile marker. The impact of 20mm cannonfire could clearly be discerned upon the mile marker and probably occured during the same incident. All in the party were apparently killed instantly. They were initially buried beside the milemarker (see photos) before being reinterred later in plots beside each other at Oosterbeek War Cemetery. 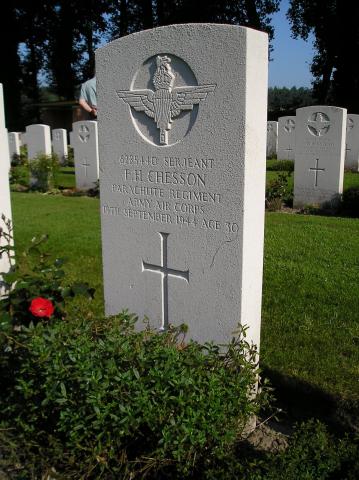