Frank Silvester was born on 18 April 1924 came from Cheadle Hulme in Cheshire.

He enlisted in the Army on the 5 November 1942, when he was still only 18 years old. When he had completed his training he volunteered for Airborne Forces and was posted to the 1 Air Landing Reconnaissance Company, then stationed in Bulford.

Frank was assigned to A Troop, where he remained until its disbandment nearly 3 years later.

Later on he served in North Africa, May to September 1943 and whilst there he did a parachute course in August. He then took part in ‘Operation Slapstick’, the seaborne landing at the Italian port of Taranto in September 1943.

Back in the UK in 1944 he was a part of 2 Section, A Troop, under the command of Lieutenant ‘Dougie’ Galbraith.

Troopers Frank Silvester and Leslie Blackman probably took off for Arnhem in a Horsa glider from R.A.F. Tarrant Rushton, on Sunday, 17 September 1944, but did not arrive, as this was one of the two gliders from the Recce Squadron allocation that failed on the first lift. They took off again, with the load in another Horsa glider, on Monday, 18 September 1944, and landed successfully on LZ ‘Z’, which at this time was under fire from the enemy. Unloading successfully they were directed towards Oosterbeek to meet up with the rest of ‘A’ Troop and the Squadron.

Frank Silvester was heavily involved with all the actions from then until the end of the fighting in the Oosterbeek perimeter, and withdrew with the remnants of A Troop on the night of the 25/26 September 1944, back across the Lower Rhine to the main Allied lines.

After demobilisation he returned to Cheadle Hulme and settled there. He died aged 50 in 1974 after a massive heart attack. 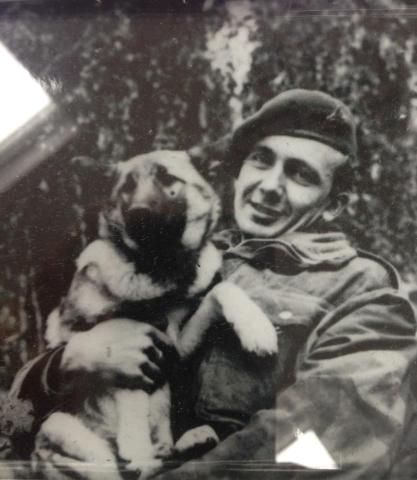