Frank Buck enlisted into the Royal Sussex Regiment and volunteered for airborne forces in November 1942.

After the selection process, carried out at the Depot School and Airborne Forces at Hardwick Hall near Chesterfield in Derbyshire he was sent on parachute course 40 at RAF Ringway from 23 November to 11 December 1942. Private Buck sprained an ankle on the second balloon jump and didn’t complete the course.

He must have complete a later course as he was later posted to The 21st Independent Company the Parachute Regiment and deployed with the Company to North Africa the following year.

A fine, well-built athlete, Frank was renowned within the Company for his physical prowess. He attended a PT course at the Southern Command School of Physical Training in June 1944, eventually being selected for transfer to the Army Physical Training Corps in September 1944. As such he narrowly missed out on the Company’s deployment on Operation Market Garden.

He was posted back to 21 Ind Para Coy in December 1944 in the rank of Sergeant, officially taking on the role of Company PTI before deploying with them to Norway and then Palestine. He was demobilised in August 1946.

Following a brief spell in civilian life, Frank re-enlisted in January 1947 and served for a further two years with The Buffs (Royal East Kent Regiment) in the Far East, eventually leaving the Army towards the end of 1949. 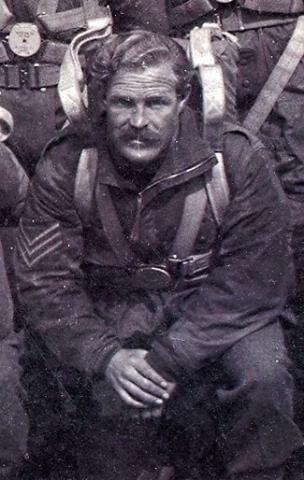