Born in late 1907, Francis (Frank) Morris was the third of at least five sons and one daughter of parents James and Sarah Morris (Nee Davies), who had married in Kington in 1900.  Living at Mahollam Cottages, Kington, Frank attending Mahollam School until the age of 14. Leaving school, he joined his father in the employment of Col Bertram Henry Samuel Romilly DSO and Margaret Nelly Ogilvy Hozier (sister-in-law of Sir Winston Churchill) at Huntington Park House as a gardener.

Showing a keen interest in joining the Police force, Colonel Romilly suggested he thought it would enhance his ambitions if he served a term in the his old regiment, the Scots Guards. In 1925 at the age of 18, Frank enlisted with the Scots Guards with the help of a letter of recommendation from the Colonel. Initially stationed at Wellington barracks he met his future wife, a local girl Florence Mary Bowdry, at Marble Arch and on 1 October 1930 they married before having four children together; Gwen, June, John, and Jim.

Soon after his wedding he was posted to Hong Kong to serve the remainder of his term, and reaching the rank of Sergeant before returning to the UK in the mid 30’s. After being demobbed, Frank returned to London, where he lived in North Kensington and became a warden of the Victoria and Albert Museum.

At the outbreak of the Second World War in 1939, Frank re-enlisted, serving initially with the Royal Artillery. He later volunteered for the newly formed Parachute Regiment, serving in North Africa, Italy, and North West Europe with the 1st Battalion.

By 14:45 hours all but three members of the 1st Battalion had come together at the RV and at 15:40 they set off on foot march towards Arnhem. They travelled as planned using the Northern Leopard Route that was to have been used earlier by the Reconnaissance Squadron in their attempt to take the bridge as a Coupe-de-Main force. The 1st Battalion tasked with taking and holding the High Ground to the north of Arnhem.

On reaching the railway station at Wolheze, the battalion was met by elements of the Reconnaissance Squadron, who by this time should have been at the bridge, but had run into fierce enemy opposition who had formed a blocking line covering the railway to the east of Wolheze. Armed with this new intelligence, the Commanding Officer, Lieutenant-Colonel David Dobie, altered the Battalion's planned route and ordered his men to try and bypass the German blocking line by moving North until they reached the main Amsterdamweg from where they would be able to move on good roads straight into Arnhem, but like the Recce Squadron earlier, ran in to stiff opposition including Armoured Cars. After periods of heavy fighting a second decision to change the route was made. The Battalion (minus R Company who had become separated in the bulk of the fighting) headed back South in an attempt to get through to Arnhem, and to the bridge where the 2nd Battalion had now taken the North end of the bridge.

Having kept moving throughput the evening and early hours to Oosterbeek, Dobie decided to try the main Utrechtsewg towards Arnhem as it was a shorter route than the one used successfully by the 2nd Battalion the previous day. With no information received that the 3rd Battalion had experienced any opposition, it was thought this would save valuable time in their advance into Arnhem.

Major Ronnie Stark's S Company was leading the Battalion column, with Lieutenant Bob Feltham's No 7 Platoon out in Front. The leading troops left the built-up area of Oosterbeek and came to an area of allotments prior to passing under the railway line ahead. The Railway banking was manned by Germans, and after a short firefight, Dobie issued further orders to disengage from the enemy and to move south towards the lower road along the river, in an attempt to reach the Arnhem Bridge without fighting anymore major engagements on the way. The Battalion successfully took a side road and moved down to the lower road, troubled only by a sniper who was dealt with, and came to the railway bridge at Oosterbeek Laag Station.

On the 18th September it is believed that Sergeant Frank Morris was killed when hit by the sniper in the vicinity of the Oosterbeek Laag Station, although his death is not registered until the 19th September.  Having no known grave, Sgt Morris is remembered on Panel 8 of the Groesbeek Memorial at Groesbeek Canadian War Cemetery.

Compiled with information from his Great Granddaughter Isabelle Rundle, for ParaData by Phil Jennett. 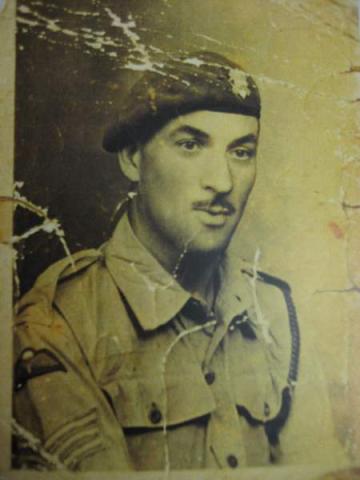