Francis McNeice enlisted into The King's Regiment on 1 May 1935.  Whilst with the Kings he achieved both his 3rd and 2nd Class Army Education Certificates.

In March 1938, he was posted with the Kings to Gibraltar where he remained until May 1942. On his return to the UK, he completed weapon training on the 3" Mortar, Rifle and Light Machine Gun and is recorded as a 1st Class Shot.

On 7 July 1943, LCpl McNeice joined The Parachute Regiment and attended Parachute Course 76 at RAF Ringway between 2 August 1943 and 13 August 1943 before joining the 4th Parachute Battalion in North Africa

LCpl McNeice returned to the UK in June 1945, remaining there until his discharge in February 1946. 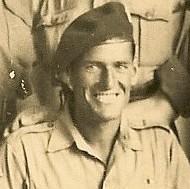