Captain Francis John Thomson Neale was the son of Alan Skeffington and Eileen Monica Neale, and husband of Sheena Mary Martin Neale, of Horley, Surrey. He originally enlisted in Royal Army Service Corps, before transferring to the Glider Pilot Regiment. By late 1944, he was Second-in-Command (2-i-c) of HQ B-Sqn and took part in the glider insertion to the Battle of Arnhem, during Op Market Garden.

Captain Neale drowned whilst trying to cross the Lower Rhine during the evacuation of the 1st Airborne Division and died on 26 September 1944, aged 24 years old. His body was recovered from the Rhine at Amerongen in October 1944, and was then buried at Amerongen (Holleweg) General Cemetery, near Utrecht.

If you are part of Captain Neale's family and would like to complete this biography, you can apply to the curator to do so. To do this you will need to become a member of ParaData and select the 'friend or family member' option on the registration form. If you would like to find out more about becoming a member please visit our registration page. 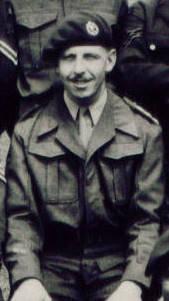