Francis George Wood was born and brought up in Devon and enlisted into his county regiment during World War II.

He volunteered for airborne forces aged 19 years and qualified as a military parachutist on Course 61B which ran at RAF Ringway from 26 April to 4 May 1943. Normally paratroopers were required to undertake 2 balloon jumps and 5 aircraft descents to qualify for their 'wings', however this course was shortened because of the urgent need to supply reinforcements to 1st Parachute Brigade who had just emerged from a victorious but costly campaign against Axis forces in North Africa. As a result, the course intake was only required to complete 2 balloon jumps and 3 aircraft descents.

Francis was posted to R Company, 4th Parachute Battalion which formed part of the 2nd Parachute Brigade. The brigade was tasked with a role in the Sicily landings in July 1943, although it was not deployed.

He took part in the amphibious landings into Italy in September and fought in the offensive actions of 2nd Para Bde against the Germans at Orsogna and later on the Sangro front. In the Spring of 1944 he performed a defensive infantry role on the Monte Cassino front.

He went on to serve with the 4th Battalion in Greece on internal security duties and returned to Italy with the brigade in January 1945.

While in Italy, he developed pneumonia and spent four months in hospital at Foggia before rejoining the brigade, as a member of the 2nd Parachute Brigade HQ, with whom he deployed to Palestine until his demobilisation.

Francis was born and brought up in Dartmouth in Devon. His grandfather and great-grandfathers had all been seafarers, his father a signaller in the Royal Navy. 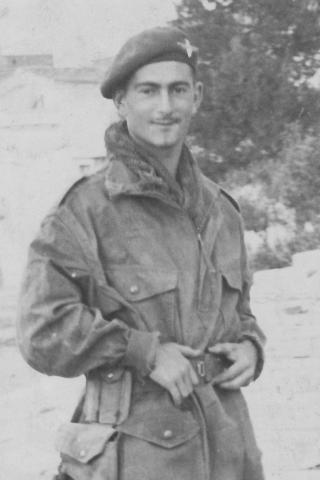