Private Jones volunteered for airborne force when the 13th (Lancashire) Parachute Battalion was formed from the 2nd/4th Battalion The South Lancashire Regiment in May 1943. He qualified as military parachutist on Course 72 which ran from 12 to 23 July 1943 at RAF Ringway, the course instructors’ report stated: ‘Pte Jones: Average good worker. Reliable.’

In June 1944 he took part in the Normandy campaign, Operation Overlord.

During the heavy winter fighting in 1944-5 in the Ardennes 'Battle of the Bulge' the 13th Battalion was tasked to capture the village of Bure, which it accomplished after a costly three-day battle.

During this battle Pte Jones was Killedin Action on 3 January 1945, he was 21 years old. 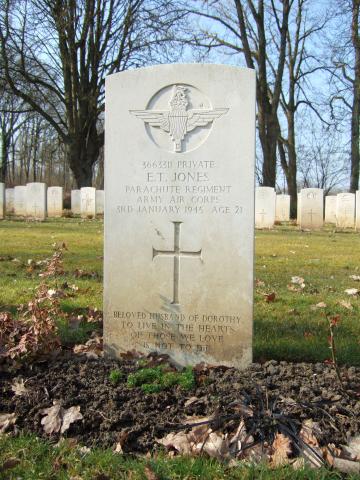