Born in Dundee, Angus, Ernest Smith 'Ricky' Ritchie volunteered for the Army and enlisted in the Royal Scots.

He attended 165th OCTU in Scotland in July 1942 and was commissioned into The Sherwood Foresters, the regiment of a friend.

He volunteered for parachute service and attended the Parachute Training School at Ringway. He was posted to 11th Bn Parachute Regiment, 4th Airborne Brigade, 1st Airborne Division and dropped into Arnhem on day 2 of the airborne assault.

At one time he was point platoon commander of the point company during their advance towards the road bridge and the 2nd Bn, fighting at one time alongside the Staffords.

He was wounded badly in the leg by shrapnel and on the virtual destruction of the battalion was captured by the Germans.

Sent to Oflag IX A/H at Spangenberg, he was treated well by the Germans. In the PoW camp he contributed a poem about Arnhem to 'The Quill' the camp magazine, later published in a limited edition after the war.

Liberated after a forced march by the Americans, Ricky went back to the Regiment and went to Palestine with the 6th Airborne Division.

While there he decided to become a regular and attended a Regular Commissions Board in Egypt. After the departure from Palestine, he served in Germany, living in Goslar and carrying out extensive parachute exercises in Schleswig-Holstein before undertaking a detachment to the Royal West African Frontier Force in Nigeria in the early 1950s.

On completion of that tour he returned to his parent regiment and served with the Sherwood Foresters in Paderborn, in White's half-tracks, one of the first armoured mechanised infantry battalions.

After a tour as 2ic of the Regimental Depot in Derby, he took early retirement in 1959 and bought a cliff-top smuggling pub in Dunwich, Suffolk, where he stayed until his death in 1975.

His son Alan, followed in his father's footsteps and joined the Parachute Regiment, serving in the 1st Bn until eventually transferring to the SAS, carrying out 2 tours in Northern Ireland until his retirement. 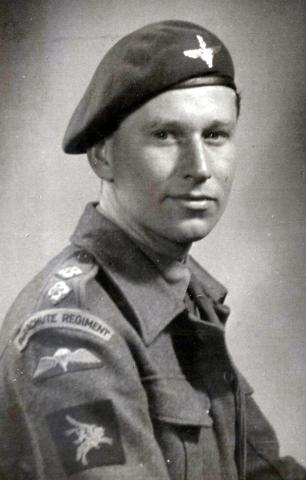