Ernest Lough was born in 1910 in Newcastle-upon-Tyne.

He enlisted into the Royal Army Service Corps, as a clerk, in 1929, and by 1939 he reached the rank of Warrant Officer.

Ernest was commissioned as a Second Lieutenant in the South Staffordshire Regiment on the 27 January 1940.

Having volunteered for Airborne Forces, and by now a Captain, ‘Ted’ Lough did parachute course No 63 at R.A.F. Ringway, 4th – 17th May 1943. His Parachute Instructors comments: “A fine officer. Worked extremely hard”.

Upon completion he was posted to 5th Parachute Brigade Headquarters, formally taking up the post as the Deputy Assistant Adjutant & Quartermaster General on the 3rd June 1943. He had matters well in hand when Brigadier Nigel Poett arrived to take up his new command.

On the 5 June 1944 he was to jump onto Drop Zone ‘N’ in Normandy with the HQ of the 5th Parachute Brigade.

‘I was No 1 of a “stick” of 24, which included Leonard Mosely the Daily Sketch Correspondent. We took off from FAIRFORD, Gloucestershire, in a Stirling aircraft of 620 Squadron, Royal Air Force, (Captain S.L. Maloney, DFC) shortly after 23.30 hours, D – 1. After take-off and climb, we assumed travelling positions and started collecting our kit-bags, which had been stowed forward for take-off. We had only a faint light in the aircraft and considerable difficulty was encountered in getting the right kit-bags to the right chaps and in finding the quick release pins, some of which had come undone. After about 40 minutes flying we had succeeded in sorting out ourselves and our equipment. We then had tea from the thermos flasks carried in the aircraft, and at about 00.15 hours we commenced “hooking-up”, fastening our parachute static lines to straps n the aircraft. I ordered a very careful check of static lines to ensure that they were correctly fastened, and re-checked them myself, which was somewhat difficult in the crowded plane.

At about 00.30 hours, the Sgt Wireless/Op, came aft and I assisted him in opening the paratroop exit door. After it was open I got my ‘stick’ in their jumping positions and sat on the edge of the aperture. The wireless operator stood aft of the exit, and kept relaying from the Captain of the aircraft the minutes to go before we were to drop.

After a time we crossed the French coast, and I remember seeing the waves breaking on the shore. All seemed peaceful below. Immediately after-wards I saw a few coloured streaks in the sky, apparently some distance from the aircraft, but I did not realise at the time that this was the first ‘flak’. I was awakened from my reverie by the red paratroop signal light flashing on above my head. I stood up and shouted “Action stations”, but doubt if anyone heard me above the noise of the aircraft engine. However, I guessed they had all seen the warning light. Then – flash! – the green light came on and I immediately jumped. I felt a gentle tug as my parachute opened and shortly afterwards I landed. During my descent I could not identify any of the known landmarks, which was not surprising as the moon was obscured by cloud and it was comparatively dark.

Within ten minutes of landing I had rallied a party of about 20 men, including several men of other units, but only two men, including my batman, from my own aircraft ‘stick’. From a quick look at the skyline I realised I had not been dropped on D.Z “N” and I therefore ordered my party to take up defensive positions, to lie low and keep quiet. Meanwhile, I endeavoured to discover the approximate area in which I had been dropped. In the absence of any familiar landmarks I decided to deduce the direction of my R.V. from;

Listening for the agreed unit R.V. aids (bugle, hunting horn, whistle and motor cycle hooters) and sounds of activity from the D.Z., where the sappers were to commence demolition of anti-airlanding obstacles as early as possible after landing.

From my observation of the aircraft stream, which was moving right to left to my front, and explosions and machine-gun fire which also came from the direction to my front, I deduced that I had been dropped EAST of the D.Z. This appeared to be confirmed by several men of the 3rd Parachute Brigade, whose D.Z’s were to the EAST of D.Z “N” joining my party, at this stage. There was no other movement in the area in which we had landed and I decided that as we were probably some distance from both Brigade’s D.Z’s it would be better to keep all the men who joined my party until we reached a unit R.V. I therefore decided to march due WEST by compass, avoiding roads, and to halt frequently for observation, and listening. At the same time I gave clear orders that no one was to open fire except on my orders, because I appreciated that we would almost certainly meet other parties moving towards the R.V.

After moving cautiously, quietly and slowly westwards for fifteen minutes I halted my ‘stick’ and listened for about three minutes. I thought I heard a bugle in the distance and certainly some explosions from the NORTH and NW. I decided to continue moving WEST. After a further thirty minutes, which included the negotiation of a road and thick hedge, we came out into more open country. I again halted my ‘stick’ near the edge of a wood and moved forward into the open to observe and listen. At this stage, I was surprised to observe a green light (the R.V. signal of the 7th Parachute Battalion) flashing to my left rear, i.e. from the S.E. However, after listening some time – probably five minutes – I definitely identified the distinctive sound of a motor-cycle hooter repeated at frequent intervals from the WEST. This was the R.V. signal of 591 Parachute Squadron, R.E. I therefore decided to continue moving due WEST and after marching – again cautiously and alert – for a further hour or so – we came to a high brick wall. As we were skirting the wall, one of my scouts observed a party moving in our direction from the N.E. I ordered my men down. The other party must have spotted us at the same time, for they too went down and I heard the ominous clicking of rifle bolts – followed by some good Elizabethan English! I therefore decided to take immediate action before a battle started, so I stood up and shouted “V, for _”, which was the call for our password for the day. Immediately afterwards, someone in the “enemy” party stood up and shouted “Victory”, which was the correct password. I therefore walked over and found a stick of the 12th Parachute Battalion. We joined up, and shortly afterwards we found ourselves in the outskirts of RANVILLE, now held by the 13th Parachute Battalion. I eventually reached my own R.V., on the Western edge of the D.Z. at 04.30 hours, where I reported to the B.M. [Brigade Major] The remainder of my ‘stick’ were then sent off to their own R.V’s which were nearby, except for the 3rd Parachute Brigade party, who we decided to hold with us until contact with that formation had been made.

Sometime later I attempted to re-trace my steps and estimated that I had landed just WEST of LE MESNIL, and probably SOUTH of the road RANVILLE – LE MESNIL’.

On the 22 March 1945, in the London Gazette, ‘Ted’ Lough was 'Mentioned In Despatches' for his actions in Normandy.

He also took part in the Rhine Crossing, ‘Operation Varsity’, 24th March 1945, but was injured when his Horsa glider landed heavily and he was evacuated.

On the 21 June 1945 it was announced in the London Gazette that he had been awarded the MBE. His citation reads:

'Major ES Lough has been DAA & QMG of 5 Parachute Brigade since the Brigade was formed in June 1943. He was the first Staff Officer appointed and to him fell most of the staff work connected with converting the Brigade HQ and Infantry Battalions to the Parachute organisation.

During the operations in the Ardennes and Holland, 25 December 1944 to 31 January 1945, outstanding work has been done by Major Lough. The frequently changing situation has required a number of quick and unexpected moves. Major Lough’s forethought and ability have been an important factor in the smooth execution of these plans. His cheerfulness, energy and infectious enthusiasm have been an example and inspiration to all with whom he came in contact.

During the action at Bure, between 3rd and 6th January 1945, his soundly laid administrative plans were responsible for the successful maintenance of the force in the village and the evacuation of casualties; while his own cool and cheerful personality during his visits to the village under heavy shell fire and his obvious grasp of the situation was a source of great confidence and encouragement to the troops.

Throughout his period as DAA & QMG of 5 Parachute Brigade his fine example of unfailing loyalty, devotion to duty and interest in the welfare of the troops has resulted in an exceptionally good spirit of co-operation between the staff and units throughout the Brigade.'

He continued to serve in the Army after the war and on the 24 May 1954 he was promoted to the rank of Lieutenant Colonel, and he eventually retired with the rank of Brigadier.

Created with information and images kindly supplied by R Hilton 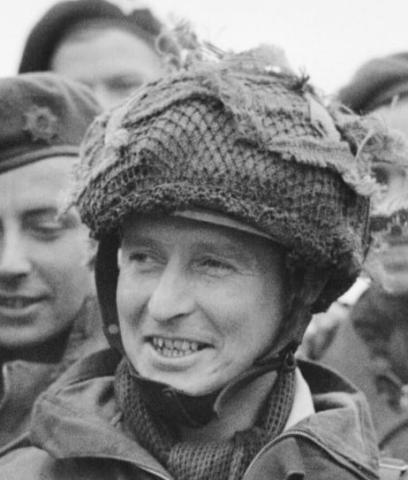