Ernest was the son of Fritz Wyss and Florence Whittaker. He was born in Chester District, Cheshire/Flintshire.  Ernest was educated from 1931 to 35 at the Moseley Grammar School.

He was commissioned as a 2nd Lt (Emergency Commission) on the  7 September 1940 with The South Staffordshire Regiment. On 13 December 1942 he transferred to The Parachute Regiment Army Air Corps, but by July 1943 he was transferred back to the 2nd Battalion South Staffs. Regiment, now as Second in Command of C Company. He went to Sicily with this Unit.

Captain Ernest M Wyss 'Oscar' was killed in action, attacking a tank with a Bren gun at a distance of only 20 yards, after his unit had exhausted their supply of PIAT ammunition. He was killed near the 'museum area', sometimes referred to as 'The Monastery'. He was awarded a MiD in September 1945 in recognition of his bravery throughout this operation.

He was laid to rest at The Arnhem, Oosterbeek War Cemetery.

Images and information kindly donated by R. Hilton. Profile image from the book 'By Land, sea and Air' courtesy of Alex Junier. 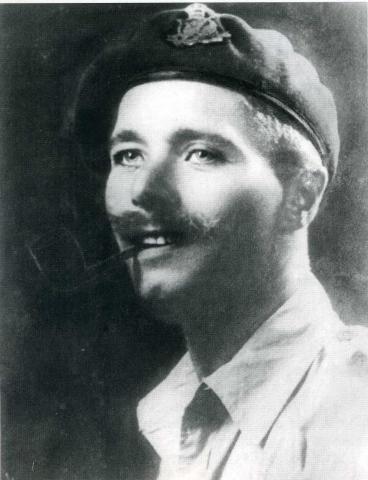