Ernest Albert James, known as ‘Jim’ was born in Bournemouth on 1 September 1913.

He worked in department stores in the town before enlisting in the Royal Warwickshire Regiment (RWR) in 1940. James was commissioned in 1942, and saw action in North Africa with the 3rd Parachute Battalion.

On 2 October 1943, Lieutenant James was dropped with eight men into Italy for Operation Simcol, launched to rescue Allied prisoners who had escaped from camps near Pescara. Lt James was ordered to escort the escaped prisoners to the coast, where they were to be taken by the Royal Navy.

Over the next 10 days, Lt James guided men to the coast, but the rescue vessels did not arrive at the pre-arranged time, possibly due to German broadcasts which falsely announced that Lt James had been killed. By requisitioning three fishing boats, Lt James was able to bring around 20 men back to the front line at Termoli. For his actions in Italy he was awarded an immediate Military Cross.

Lt James also took part in Operation Market Garden in September 1944. On 25 September he was within a mile of the Arnhem road bridge when he was captured. In the cattle truck taking him to Germany, he forced the lock, waited until the train passed into a wood, and jumped out. As he crossed the tracks he heard machine gunners posted on top of the trucks firing on those who had made a run for it just after him.

He found himself near Enschede, close to the Dutch-German border, and headed north and west. He was hiding in a barn when a Dutchman found him and tipped him off that the police were on their way. When, 10 minutes later, two policemen came in one door, Lt James ran out the other. He made for a line of trees and hid; though the policemen came within a few yards they did not see him.

The next day, the Dutch underground contacted him. They provided him with a bicycle, and for several months, looking like a labourer but with part of his uniform under his overalls, Lt James moved from farm to farm, dodging the Germans and keeping to wooded areas. He helped the Resistance to collect arms drops, instructed them in the use of explosives and, on one occasion, interviewed a man suspected of being a spy; Lt James was able to provide an assurance that the other man was genuine.

On 31 March 1945, after six months on the run, and after being listed as ‘missing in action’ he linked up with advancing British troops. He was able to give them much valuable information and was mentioned in despatches.

By his own account Lt James 'got too close to an explosion' at Arnhem, and had trouble with his hearing afterwards.

Lt James had married in 1939 to Dorothy Olney, who refused to believe that he was dead whilst listed as ‘missing in action’. On arriving at work one day she found a bunch of red roses with a note that read: ‘Remember me?’ Her husband appeared and the manager gave the office the day off to celebrate.

After the war he worked for the Prudential until 1975. In retirement in Ealing he enjoyed reading, drawing and playing snooker. He kept in close touch with the Dutch families who had helped him and with fellow veterans.

By Rebecca Blackburn with information supplied by The Pegasus Journal 2011 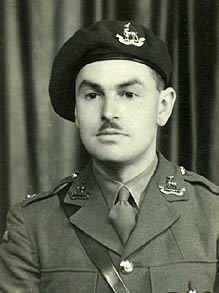 Cornelis Reijntjes said:
Lt James (Jim or Jimmy) flees after being captured at the Battle of Arnhem in the eastern part of the Netherlands. Here he is helped by the underground who hid him for several months and who he instructed in the use of weapons and explosives. One of the resistance fighters was my grandfather Geert, who regularly went out with Jimmy and experienced some hilarious adventures with Jimmy. My grandfather never met Jimmy after the war but always spoke in awe of Lt James. I would very much like to get in touch with the relatives of Lt James. Who can help me with this? Please send a message.
Add your comment