Staff Sergeant Ernest John 'Busty' Baker, son of Frederick Charles and Nellie Baker, of Shoreditch, London, served with 20 Flight, B Squadron of 1st Wing, Glider Pilot Regiment. He initially qualified as a pilot on Course 20 at the No 3 EFTS at Stoke Orchard in June 1943.

S/Sgt Baker took part in the Normandy landings, and was posthumously awarded the Distinguished Flying Medal in November 1946, for his actions on D-Day in June 1944.

He was killed by a sniper during the Battle of Arnhem, while dug in outside the Hartenstein Hotel, which was being used as the 1st British Airborne Division HQ.

S/Sgt Baker died on 24 September 1944, aged 28 years old, and was initially given a field burial on the Pietersbergseweg, near the Tafelberg Hotel. He is now buried at Oosterbeek War Cemetery, Arnhem. 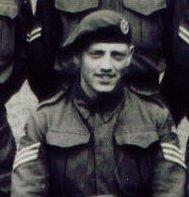