Sergeant. Ernest Henry Shelswell was an early volunteer for the Airborne Gunners: “I joined Airborne Forces in 1941, my service was North Africa, Sicily, Italy and many cancelled operations after ‘D’ Day and then of course Arnhem.” [1]

Within the 223rd Anti-Tank Battery ‘Ernie’ served in ‘H’ Troop, before it became ‘B’ Troop.

He went with the Battery to North Africa and took part in Operation ‘FUSTIAN’ on the night of the 13/14 July 1943. He flew aboard a Waco glider (C/N: 116), with two other members of his crew, Gnr’s. Allwood and Lock, and their 6-pounder gun. His Bdr, Coughland and Dvr, Hodges were on another Waco glider (C/N: 117) with the Jeep. Needless to say neither glider landed together, and the gun was ‘lost’: The After Action Report: ‘Serial 116 ‘B’ Trp gun only, Sgt Shelswell i/c landed within Catania Airfield outer defences.  Having immobilised the gun by removing the striker mechanism he withdrew with his detachment to the bridge where he manned a captured 88mm.’

The After Action Report further reports: ‘Only two gun teams were carried in Wacos, the remainder being used to carry Blitz Buggies for Trp HQs.  In the case of one detachment split in Serial Nos 116 and 117, the gun came down on Catania Aerodrome and Blitz Buggie at Lentini, a distance of over 15 miles apart.’

With a replacement 6-pounder, and still as B2 Gun Commander, ‘Ernie’ took part in Operation ‘Slapstick’, the naval landings at the Italian port of Taranto on the 12 September 1943.

TO ARNHEM BY GLIDER.

A perfect take off at 9-30 am. Just before the East Coast I remember seeing people going to church, they were walking up the path, something I will never forget. Soon after the East Coast I saw a Horsa down in the drink with Airborne chaps out on the wing, not far away was an RAF. Pick up and as far as the eye could see was the American Airborne off to Nijmegen, a stirring sight. At 13-30 hrs the Pilot pointed to the destination and I went to the door to lift it up ready to land, but one thing we lost was the flask of tea that went out with the suction. Perfect landing with easy tail off load, joined up with the rest of ‘B’ Troop and moved to the Bridge area slowly, arriving at approx. 20.30 hrs. One thing I shall never  forget at the LZ the big drop chutes of every colour, hundreds like petals from the sky.

Some time after then my Troop Officer detailed me to take the gun up a ramp walk to the end of the Bridge and deal with a Pill Box, so with my driver and Gun Team and Glider Pilots and Para’s we slowly reversed the Jeep and finally near the top it was manhandled into position. Light lorries and vans were using the Bridge and when we started to operate the Germans baled out and it appeared they were coming from all directions. We fired several shots at the Pill Box and then a flame thrower moved in – IT WAS ROUGH STUFF – during the night I withdrew from that position and parked in a street behind HQ, but during the morning of Tuesday the mortaring was merciless, we lost our first gun there, it was direct hit just across the road from me, it was Sgt. Doig’s gun, and it was still attached to the Jeep: no loss of life.

During that morning my gun was not in a position , we were dug-in the garden behind HQ. Then I was detailed to take some ammunition to a gun out on the road. I went on my own with as much 6-pdr rounds as I could carry, and when I arrived to the bottom of the street I looked left and saw an anti-tank gun about 50 yards away, and about 150 yards beyond that was a ‘Tiger’ tank. The tank fired and took a 3 storey building behind me, I arrived at the gun position dropped the rounds and it was then I found it was a ‘C’ Troop gun with Sgt Robson firing it, the first tank had stopped, but from behind it came another, and I can assure you I moved very fast back to my slit-trench. Shortly after this my Driver S Hodges was wounded in the back from mortar shell fire. I was then given a gun position across the road and I was glad to get out of that garden and get some cover from a house. We stayed there all night and during the morning of Wednesday with my Layer, Gnr Lock, I decided to turn the gun and take on some Light Vehicles crossing the bottom of the road, and it was at that point I was wounded a bullet came off the wall of the house and went sideways through my boot. At first I thought I had dropped the trail of the gun on my foot, but not so; (41 years later I pulled it out of my foot at home, it had passed from the top and came out at the bottom). Later on Wednesday they took my gun and team to a new position, left me to man a Bren Gun. After dark 2 Para’s lads came through the house. I stopped them and asked if they could get me to a Dressing Station, which they did; I was put in a cellar along with a lot more wounded and shortly afterwards they brought Gnr Lock in on a stretcher, and he was able to tell that Sgt. Doig had taken over my gun and was killed, and he died shortly afterwards. It was during Wednesday, a cease fire was arranged, to shift the wounded out. The house was burning. I was able to hop out with some help and sat on the grass awaiting to be moved. A German soldier came up to me and said “Cigarette, Tommy, we have met before, North Africa”. Of course he was talking of the unit, not me personally, then to hospital at Apeldoorn.

After he was wounded and taken prisoner: “Then wounded P.O.W. 11B and 8C, Sagan, Poland, escaped February 1945. Travelled with two of my own unit on foot, lorry, train to Oddessa in Russia and back to U.K. by boat – Duchess of Richmond – all thanks to our airborne training.” [2]

Created with information and images kindly supplied by R Hilton. 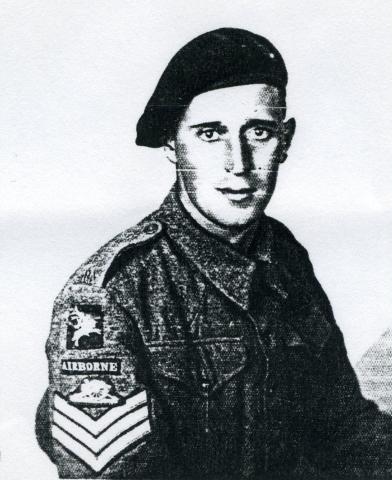