Eric  William Clitheroe was born on the 14 July 1924 at Aylsham, the son of Charles James Clitheroe and Rosa Ellen Clitheroe.

He went to enlist in 1943, and wanted to join the RAF., but the recruiter told him there were no places. He was persuaded to put his name down for the Army with a promise that he would be able to join the Parachute Regiment. He was enlisted on the 8 April 1943 and was sent for training in the Royal Artillery. Upon completion he attended a Potential Officers Course at Catterick, and was nearly finished when his application for airborne forces came through and he was sent to Hardwick Hall for the selection course.

When he had completed that he was sent to RAF Ringway on parachute course 109, which ran from the 27 March to 7 April 1944. His instructors comments': “Very confident, good stick man. Excellent performance”.

Eric’s older brother, Thomas Craske Clitheroe, was serving in the RAF with 12 Squadron and had been shot down and killed on his 27th mission over Stuttgart. He has no known grave and is remembered on the Runnymede Memorial. He had been involved in bombing missions in Normandy in support of the invasion.

Eric went onto be posted to the 22nd Independent Parachute Company and carried out a lot of practice jumps from different aircraft trialling the carriage of different loads and equipment for the invasion.

In the event he was not used on the pathfinder parachute jump into Normandy and continued his practice jumps and trials through the Summer of 1944.

In December 1944 he was in a cinema in London when the Military Police entered and told all 6th Airborne Division men to return to their units, he had been expecting to go on Christmas leave. This was the reaction to the German counter-attack against the American Army by the Germans on 16 December, and by the 20-21 December the 6th Airborne Division were moving over the channel to the Continent. Eric spent the end of December and well into January 1945 in the Ardennes region of Belgium and then moved up to Holland. He commented that the Company suffered quite a few seriously wounded casualties, from mines, during their time in the Ardennes.

He returned with the Company to Bulford in late February 1945, to prepare for the next airborne operation. This would turn out to be ‘Operation Varsity’, and the 22nd Independent Parachute Company would have a force of 22 men take part in it.

On the 24 March 1945 he took off for the Rhine Crossing operation in a Hamilcar with a Bren Carrier, Jeep & trailer + 8 men. During the flight to the Landing Zone (LZ), code-named ‘P’ near Hamminkeln in Germany, the glider had an anti-aircraft shell explode very close to them and it damaged Eric’s right ear-drum, rendering him deaf in that ear for the rest of his life. Their glider was one of the few to make it onto LZ ‘P’ intact and in the right place and Eric recognised the location immediately from his study of the air photographs. “We had instructions about the destruction of the signals kit and equipment, if it looked likely that we could be captured. However, we were able to get straight out of the glider and into a ditch, at the corner of a field, to take cover. This was near a small wood, two farms and with an anti-aircraft gun firing nearby, at other gliders still landing. As we moved towards the farm complex a machine-gun opened fire on us and shot off the top of our radio aerial.” [1]

It is likely that this was the Kopenhof Farm location, which was being used by 6th Airborne Divisional Headquarters. “Later on in the day I got dug-in next to an orchard, plenty of apples, and used a camouflaged parachute over and in my trench. One of our group commandeered a German truck and used it to collect containers. We took several German soldiers prisoner during the course of the day, some of them just ‘wandered’ into our position. That night when we set up our perimeter we put out comms chord to keep in touch with each, as we were spread so thin.” [2]

Lieutenant. Douglas Dudgeon Campbell was his officer and he was awarded a Military Cross for his actions in the advance across Germany, which included an attack on some anti-aircraft guns. Several Germans were taken prisoner and were handed over to him and a young paratrooper, who Eric thought was a little bit ‘jumpy’, but they didn’t have to hold them for long as tanks came up to their position early the next morning. One of the other prisoners taken had cycled into their position not realising that British soldiers were there! “When the tanks began to appear along the road Lieutenant Campbell ordered me to find out who they were. Obviously I was very nervous, but got up from my position and began to walk towards them, praying to myself all the time that they would be friendly – which they were!” [3]

Eric carried out part of the advance towards Minden aboard a Bren Carrier, and remembered that the most often asked question by the German prisoners was, “How far Ruskies?”, who they were terrified of.

When they eventually met up with the Russians, near Wismar, on the Baltic coast Eric remembers that they seemed to have plenty of alcohol to drink and offered it freely to the British troops.

On return to the UK the 6th Airborne Division was warned off for service in the Far East, but only the 5th Parachute Brigade and some attached troops went, before the war against Japan ended. Eric went on to serve with the 22nd Independent Parachute Company in Palestine and later, when that unit was disbanded he transferred to the 3rd Hussars. He was discharged from regular Army service in June 1947. 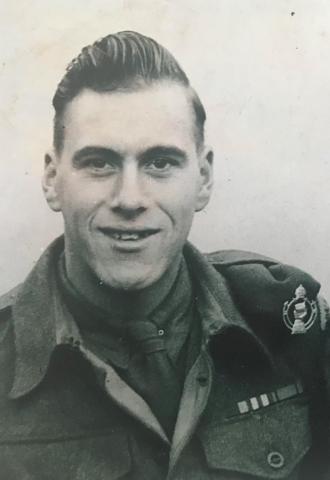