Private Eric Sydney Coppock, the son of Albert E. and Annie E. Coppock, of Oxford. Born in 1926, Eric lied about his age and joined the Home Guard in 1942.

In July of 1943 Eric would join the Royal Air Force and train as a rear gunner on Lancasters. It has been said that Eric was not too fond of the cramped rear turret of Lancasters, which may have resulted in his transfer to the Army Air Corps around November of 1944. Eric joined the 8th Parachute Battalion of the 6th Airborne Division after completing Parachute Course B167.

Eric would go on to serve in the Post-War Palestine campaign and would not be discharged until February 13, 1948. Upon returning home to the UK, Eric managed to catch a ride on a Lancaster and immigrated across the Atlantic to Hamilton Ontario, Canada. He would go on to marry Doreen Betty Collins (also from Oxford), and together they had five children. 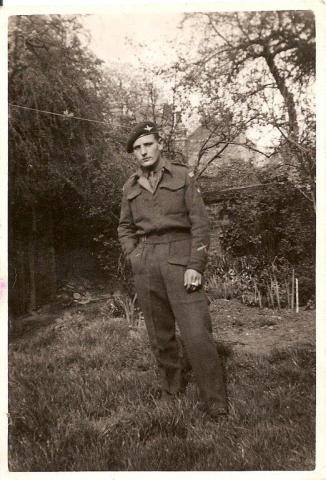