He enlisted into the Cheshire Regiment and later volunteered for airborne forces, qualifying as a military parachutist on Course 110 which ran at RAF Ringway from 3 to 14 April 1944.

He was posted to the10th Parachute Battalion and took part in the Battle of Arnhem, during Operation Market Garden, and died while fighting in the defensive pocket in Oosterbeek.

L/Cpl Richardson died on 21 September 1944, aged 19 years old. He was initially given a field burial near the Schoonord Hotel and is now buried at Oosterbeek War Cemetery, Arnhem. 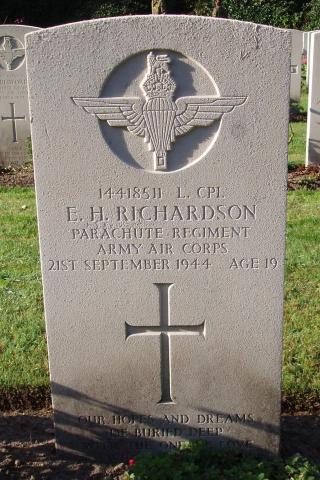