Edwin Ives was born in Leeds on the 16 September 1922, the son of Claude and Margaret Ives. He was employed as a brewers labourer until he joined the Army on the 20 September 1940, being posted to the 70th (Young Soldiers) Battalion, The Black Watch. Ives was quickly promoted to Acting Lance-Corporal, but resigned it when he was transferred to the 1st Battalion, The Highland Regiment on the 15 February 1942. However, he regained his rank and was an Acting Corporal when he again reverted to Private so that he could join the Parachute Regiment in December 1942. He was on parachute course 60, April 1943 at R.A.F. Ringway, near Manchester. On the 2 June 1943 he was posted to C Company of the 2nd Parachute Battalion, in time for the drop at Sicily. The plane in which he travelled was shot down by friendly fire when the American pilot became lost and wandered from the air route, but the stick of parachutists jumped and were scattered over the slopes of Mount Etna, some 20 miles from their drop zone. Nevertheless, Ives and others were able to fight their way back to the right side of the front line. In December 1943 Edwin returned to the U.K. and settled into his new billet in Lincolnshire. Many months of training and preparation went by, until finally on Sunday, 17 September 1944 he took off on Operation Market Garden. He jumped onto DZ X near Heelsum in Holland as part of 7 Platoon, Commanded by Lieutenant David Russel. Edwin Ives was the Number 1 of the Bren-Gun team in No.3 Section and his Number 2 was Private W. Miles. On the second day, in the town of Arnhem on the upper road, not far from the Municipal Museum, Edwin and his friend, from the first floor of a building, opened up with their Bren and Sten guns at a group of Germans near to their position. His friend was firing single rounds until he was shot and killed, whereupon Edwin, an accomplished marksman, fired at them on automatic, causing his foes to jump for cover in all directions. The situation was brought to an end when a tank came around the corner of the street and fired at his position. When Edwin regained consciousness he found that he was lying in the middle of the road below with a German standing over him. He had suffered only minor shrapnel wounds. He was initially sent to Stalag 12A and would remain a prisoner of war for 7 months. Edwin returned home from a POW camp on the 20 April 1945. He was first attached to the 205th Field Regiment, and briefly stayed with the 9th South Lancashires in July before returning to the 2nd Parachute Battalion at the end of the month. He transferred to the 8th Black Watch in October 1945, and at the rank of Sergeant was put in the Army Reserve as of November 1947. He rejoined the Army in March 1948 and again found himself back with the 2 Battalion, The Parachute Regiment, later serving in a variety of administrative roles until he was posted to the 1st Highland Light Infantry on the 1 October 1952, which included a near three-year spell as part of the Middle East Land Force. In 1959 he joined the Military Provost Staff Corps, and was finally discharged from service, at the rank of Staff-Sergeant, on the 27 February 1969. Edwin Ives had served with the British Army for almost 30 years, and his Service Record notes his conduct to have been exemplary. He died at the age of 76, on the 29 April 2000.

Compiled by Bob Hilton with the assistance of Peter Ives 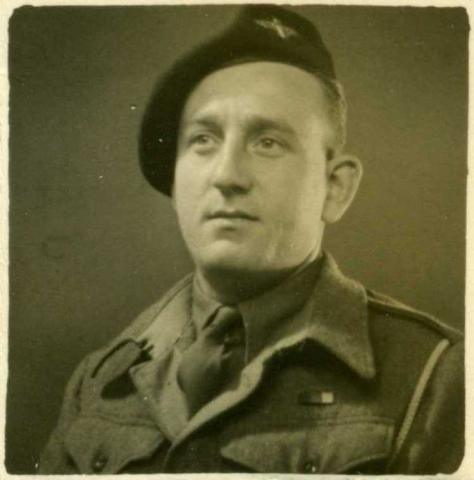