Sgt Edwin Harold Jack came from Middlesex and worked as an electrician before enlisting into the Royal Armoured Corps during World War II, on 16 April 1942.

On completion of his training with 61st Training Regiment RAC he was posted briefly to 143rd Regiment RAC. Shortly after qualifying as a driver mechanic at 10 Tank Brigade’s workshops he was posted to the Airborne Light Tank Squadron then armed with the Tetrarch tank.

As a driver of an airborne light tank, Edwin was at the forefront of the Normandy landings on 6 June 1944.

He recounted to his family that the glider pilot who flew them into Normandy had got married to a Waaf shortly before D Day. The pilot managed to sneak his new wife onto base the night before their departure. The following day while attempting to leave the base she was detained until the tugs and gliders had left, although she got the chance to wave goodbye to her husband. Sadly the unnamed pilot was killed in the landing. As they were under fire and had a job to do Edwin had no choice but to get on with the task in hand which distressed him as he knew the pilot well.

A further reminiscence told to his children in later years related to a reconnaissance patrol, most probably during the Normandy campaign. While on patrol they encountered a British soldier sitting against a tree, and it looked like he was laughing. Edwin made his way to the soldier and then realised he wasn't laughing as his throat had been cut! He recalled that there were other dead soldiers hanging in the trees including a Padre.

Edwin fought in Normandy for 3 months before returning to the UK at the beginning of September.

He was deployed to the Ardennes on Christmas Day 1944 to help repulse the Germans with their Cromwell tanks during the Battle of the Bulge.

After a hard winter of fighting he returned to the UK at the end of February 1945.

On 24 June 1945 Edwin married his sweetheart Florence Reynolds and later he was deployed with the 6th Airborne Recce to Palestine.

When the Airborne Recce Regiment was disbanded he transferred to the 3rd Kings Hussars which took over the reconnaissance role for the 6th Airborne Division. While in Palestine he found it difficult to come to terms with some of the Jewish atrocities.

He was promoted to Corporal while serving with the 3rd Kings Hussars and re-enlisted. He remained in Palestine until February 1947 and returned to take up a Permanent Staff Instructor post based in Bath with the North Somerset Yeomanry (NSY), part of the Territorial Army, as Sergeant.

At that time the NSY was the armoured regiment for the 16th Airborne Division (TA), fulfilling the role of a heavy anti-tank unit. He served on the permanent staff there for 3 years and returned to civilian life in 1950.

Although haunted by some of his wartime experiences until he died in 2001, he remained glued to the television each Remembrance Sunday.

He is fondly remembered by his family as a loving husband and father.

By ParaData Editor (HG) with the kind assistance of Jacqui Jack 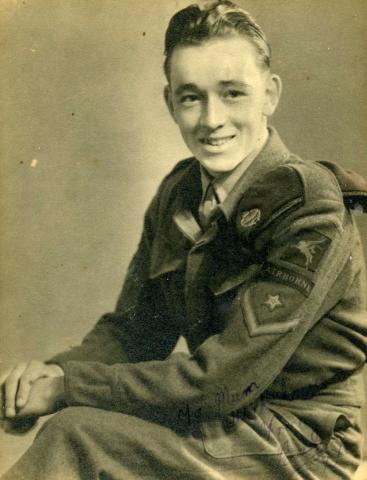