Sergeant Edward Wakefield, son of George and Ellen Mabel Wakefield, of Warrington, Lancashire, and husband of Minnie Wakefield, also of Warrington. He originally enlisted with the South Lancashire Regiment before transferring to Airborne service with 1st Wing, Glider Pilot Regiment.

Although unconfirmed, it is possible that he may taken part in the glider insertions to North West Europe in June 1944. He was amongst a party of Glider Pilots en-route to India in December 1944.

Sergeant Wakefield died on 5 December 1944, aged 23 years old when Dakota FL588 from 24 Squadron RAF Transport Command, based at RAF Hendon, crashed on a snowy ridge in Ariege, near Mijanes in the Pyrenees, Southern France. 23 Airmen were onboard, 20 of which belonged to the GPR. Fifteen other men onboard died as a result of the crash. He is now buried in the Mazargues War Cemetery, Marseilles.

If you are part of Sergeant Wakefield's family and would like to complete this biography, you can apply to the curator to do so. To do this you will need to become a member of ParaData and select the 'friend or family member' option on the registration form. If you would like to find out more about becoming a member please visit our registration page. 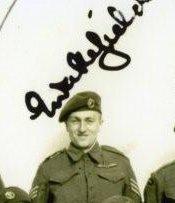