Edward Short joined the Army in April 1940 and originally served with The Bedfordshire and Hertfordshire Regiment. He was on active service in Malta when he volunteered for Airborne Forces.

After his interview and selection process was completed he was sent on parachute course 50 at Ramat David, which ran from 25 June to 7 July 1943. He completed the course and was posted to the 11th Parachute Battalion.

By September 1944 he was billeted at Carlton Curlieu in Leicestershire and was a member of No 2 Platoon, A Company under the command of Second Lieutenant J R Nicholson and he had stood to for numerous, abortive, airborne operations. Finally on Monday, 18 September 1944 he took off on the second lift for ‘Operation Market-Garden’, destination Holland. He jumped onto Drop Zone ‘Y’ at Ginkel Heath 8-9 miles to the North West of Arnhem and then began a long, tiring approach march into the town to help the 1st Parachute Brigade break through to the main objective, the Arnhem Road Bridge.

On the morning of Tuesday, 19 September, A Company was sent by Lieutenant Colonel George Lea, the Commanding Officer of the battalion, to try and outflank the enemy that were proving such a problem to the 2nd Battalion, The South Staffordshires, who were just ahead of them. Major David Gilchrist moved his company around to the North Eastern side of St Elizabeth’s Hospital and attempted to assault alongside and across the railway line and cutting. They ran into far superior numbers and fire power and were overwhelmed in just a few hours, with many of the men being killed or wounded.

Ted was one of those wounded and as such was initially treated at St Elizabeth’s Hospital before being moved to a temporary ‘Airborne Hospital’ set up in an old barracks at Apeldoorn.

He left there on 26 September, as walking wounded, and was sent to Stalag XIB, prisoner number 117579.

He would remain a prisoner for eight long months until finally liberated by Allied Forces in April 1945.

Later on in life he joined the Arnhem 1944 Veterans Club.

Account and Diary of Pte E Short, Captured at Arnhem, Detailing His Time in a PoW Camp

In April 1940, aged 20, I received notification from the War Office that I was to report to Bedford Army Barracks to start Army service. 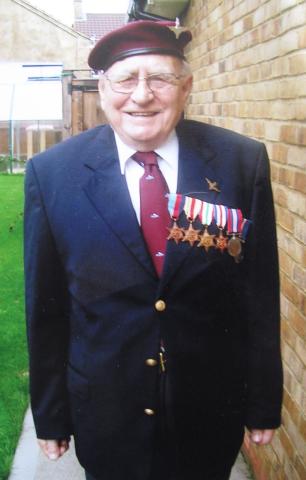