Ted first served with the Royal Irish Fusiliers, rising to the rank of Second Lieutenant. In 1943, he volunteered to join The Parachute Regiment and completed his training at Bulford and RAF Ringway in May 1943. He passed confidently and was described as 'very keen and interested in the work'  in the Ringway course instructors' notes

As part of his Parachute Regiment training, he attended several battle courses in the following months, including one at an Infantry Battle School in the New Forest. On one occasion, he completed an exercise so quickly he was suspected of cheating. His account follows:

"For one of the night exercises we were loaded into the back of sealed lorries, issued with a map and a compass, and dropped off one by one at unknown destinations scattered over the countryside. We then had to identify were we had been dropped, and make for a rendez-vous some miles away without being captured by the Demonstration Platoon. We were on our honour not to walk on roads or railway lines. This was right up my street, the sort of thing that I had been trained for, and practised many times. I arrived at the RV several miles from the camp at such speed, that the staff accused me of cheating. When much later everyone had assembled the Colonel ordered everyone to embus 'except for Lieutenant Pool who can make his own way back to camp.'

Ted was assigned to command 5 Platoon, B Coy, 7th (Light Infantry) Battalion, The Parachute Regiment in the 5th Parachute Brigade of 6th Airborne Division. In the first days of June 1944, the battalion assembled at RAF Fairford to emplane for Op Overlord - the Nomandy landings to liberate France from German occupation. Ted decided to hide his wallet while preparing for the operation:

"In case of my capture, I had concealed my cotton wallet by sewing it inside my Battle Dress trousers, by my right hip. This probably assisted in saving my life when I was wounded, some weeks later. It slowed down a fragment of shrapnel which was on its way to go through me, but slowed by my escape kit, it only penetrated just over halfway."

Ted occupied himself with ascertaining their position during the flight in a Stirling, which helped prevent fear getting the better of him.

"Then the red light turned to green, I hurled out the bicycle and followed it quickly. As soon as I had lowered my leg bag on its cord, I had time to look round, and by good luck picked out the tower of Ranville Church, silhouetted against the darkness by the flash of an explosion. I knew then exactly where I was dropping."

Although most of the battalion were widely dispersed, Ted's platoon assembled to nearly full strength quite quickly. However, the platoon were soon confronted by enemy troops, and it took some time to grew accustomed to battlefield behaviour. As Ted describes:

"Because we had arrived from the calm of England by parachute, it took a little while to adjust. If the battle required, [w]e no longer needed to think of shutting farm gates, walking round the crops, or respecting buildings. The arrival of the stick grenades was a reminder of this."

Lt Pool led his platoon throughout the day at le Port on 6 June 1944 . He was awarded the Military Cross for his part in holding an outpost at Caen Canal near Benouville on 6-7 June 1944 for 21 hours (see medal citation). On 18 June, while trying to knock out a machine-gun post in the Bois de Bavent, Ted was hit in the leg, hip and groin, and a phosphorus grenade in his ammunition pouch was ignited by one of the shots. He was dragged to safety by Sgt McCambridge and some riflemen, and endured weeks of great pain and semi-consciousness until he found himself back in a recuperation centre in England having lost a leg.

After recuperating he took courses through their initial training and then jumps at Ringway. When the Depot moved to the Isle Of Wight, Ted was tasked with closing the operation at Hardwick before finally commanding HQ Coy at Aldershot.

Compiled by ParaData Editor from information supplied by Edward Pool

In the early hours of June 6 1944, Pool, a platoon commander serving with the 7th Battalion the Parachute Regiment, was dropped near Le Port, a small village close to what is now Pegasus Bridge.

Lieutenant Edward 'Ted' Pool was recommended for an award for action in the Normandy campaign. The following is an extract from Public Records Office (ref WO 373/48): 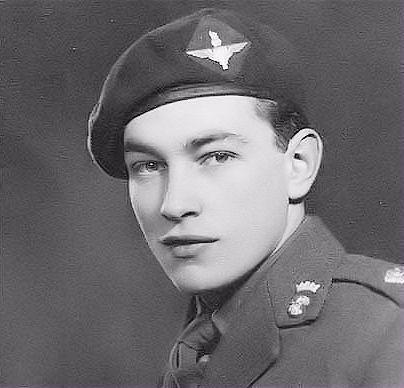