Private Ogston was on parachute training course 34 at RAF Ringway, Manchester. It ran from 22nd October 1942 until 27th October 1942.

It was while in training at Larkhill on Salisbury Plain that he met Hilda who was serving in the ATS.

They returned to Aberdeen to be married in the family's Presbyterian Church before Edward went on to serve in North Africa, Greece, Italy, and Palestine with the 5th (Scottish) Parachute Battalion.

Edward's military conduct was listed as 'Very Good' by his superiors. He was described as a very trustworthy individual who was cheerful, and exceptionally cool-headed in danger.

The war over, Edward and Hilda settled in Irlam, Manchester, where Hilda's family originated. It was here they raised their large family.

Edward passed away in October of 1997, however his memory lives on in his children, grandchildren, and great-grandchildren. 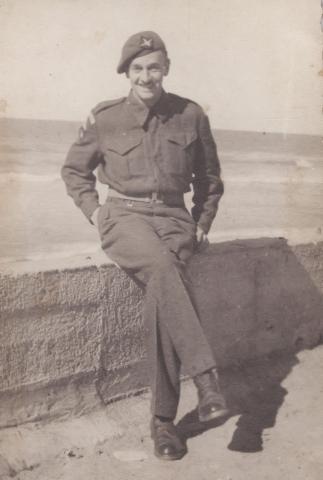