Private Peters saw service in North Africa and took part in the invasion of Sicily and Italy in 1943. He returned to England with his unit and was billeted in Lincolnshire, in preparation for what they thought was an invasion of Europe. However, the unit did not take part in D Day, but were instead sent to Burford in Oxford in August 1944.

Billeted in pig sties on a farm, the Battalion prepared for 15 airborne operations which were postponed, before Operation Market Garden was scheduled for 17 September 1944. In the early morning, Private Peters along with 14 Platoon, boarded a Horsa Glider which was towed to Holland, encountering flak as they flew over the land.

Landing in zone ‘S’, B Company advanced towards Renkum, and then to Westerbowing. After several days fighting and defending their positons, the order was given to withdraw. Of all the men in 14 Platoon, only two made it back across the Rhine.

In May 1945 Sergeant Peters along with the 1st Airborne Division flew to Norway to oversee the German surrender.

Sergeant Peters was demobilised in 1946.

Johnny Peters was the Chairman of the Arnhem 1944 Veterans Club, and a keen and active supporter of the Airborne Assault Museum and The Parachute Regimental Association.

Johnny Peters passed away in Ipswich hospital on 8 August 2014.

This profile is under development.

By Rebecca Blackburn with information supplied by Johnny Peters

An account of Operation Market Garden, by Johnny Peters. 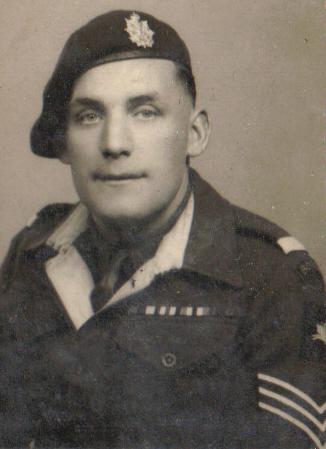 Bev Harden said:
My dad, Wilf Oldham, had his 90th birthday at the end of August 2010, and we had a party for him. People came from far and wide, including his Dutch 'family' and friends from Holland. Johnny Peters also came to the party, and it was an honour to meet him.

I have heard Dad speak warmly about him on many occasions. Johnny gave a speech at the party - one that moved me to tears, and gave me a little bit more insight into why such bonds endure over the years. Two more of dad's comrades were also at the party, Jack and Norman, and we have a fantastic photograph of the four of them all together.
Add your comment