Lance Corporal Edward "Frank" Glenn was the son of Frank and Jessie Glenn, and husband of Mary Ellen Glenn, of Clerkenwell, London.

After volunteering for Airborne Forces he attended Parachute Training Course 77 at RAF Ringway in August 1943. Average wind speeds on the course were 12 mph; for a considerable part of the course descents were made with the wind at borderline speeds (15 mph) and conditions were “rather gusty” according to the course report!

Frank suffered a severe sprain to the ankle on his first jump. Although he held a good position, he developed a violent circular oscillation and hit the ground very fast sideways. As a result he was unable to complete his training and returned to Ringway for Course 79 which ran from 23 August to 2 September 1943. He successfully completed this course and the instructors noted that he was “a good performer and worked well”.

He was posted to 22nd Independent Parachute Company, a pathfinder unit, and served with No 1 Platoon. He was promoted to Lance Corporal while serving with the Pathfinders and took part in the Normandy campaign.

Lt de Lautour commanded one of the first drops by the the 22nd Independent Parachute Company on 5th June onto DZ 'V'. His 'stick' included nine other parachutists (one of whom was 'Frank'' Glenn). The stick emplaned onboard a Albemarle of 295 Squadron at RAF Harwell at 23:30 on 5 June 1944. The stick was tasked with 'marking' the drop zone for the 1st Canadian and 9th Parachute Battalions at DZ "V", although some of the radar and visual beacons were either lost or damaged. Nevertheless, they were successfully able to join up with Lieutenant-Colonel Terence Otway’s 9th Battalion, prior to the assault on the Merville Battery. 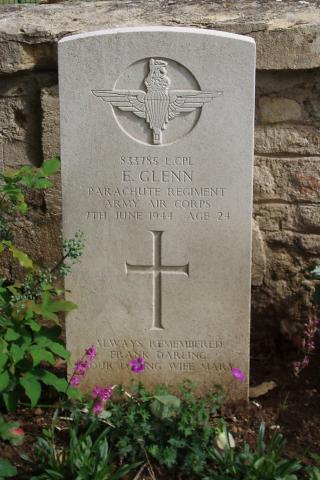