He was taken as a Prisoner of War and first went to Stalag XIB at Fallingbostel but later was transferred to Stalag VIIIC near Sagan, Germany.

In early February 1945, many of the prisoners were forced marched westwards. On 27 or 28 February while on the march near Apolda, Cpl Johnson broke the line, together with other prisoners, to go to a nearby field to relieve themselves. A previously acceptable practice although against orders that anyone breaking the line would be shot. Cpl Johnson was shot and seriously wounded in his abdomen. Although taken to a nearby hospital the wound was to prove fatal. He died on 5 March 1945, aged 29 and is now buried in Hanover War Cemetery, Germany.

If you are part of Cpl Johnson's family and would like to complete this biography, you can apply to the curator to do so. To do this you will need to become a member of ParaData and select the 'friend or family member' option on the registration form. If you would like to find out more about becoming a member please visit our registration page. Members of ParaData can submit their material by clicking on the 'add your info' button below. 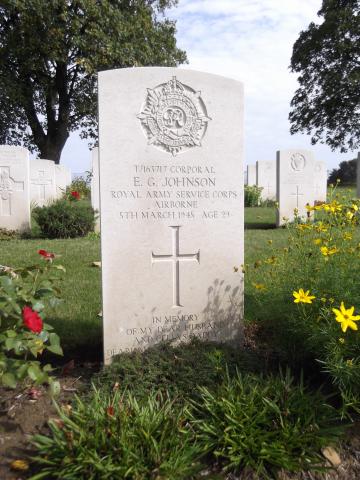