Ted was born in Norwich on 26 August 1919, one of eight brothers and sisters.

By the age of 17 he was keen to join the Army, and enlisted in the Grenadier Guards on the 19 July 1937. After the Second World War began, he was sent to Europe as part of the British Expeditionary Force and saw action in France in 1940. He was was evacuated from Dunkirk. Shortly afterwards he was promoted to Sergeant.

It was during this period that a representative of the newly-established Airborne Forces visited his Barracks in Windsor seeking volunteers to go to RAF Ringway in Cheshire, home to the Central Landing Establishment. They were offered an increased salary and despite the fact that none of the volunteers knew what awaited them, Ted decided to go. The extra money was a significant attraction!

After transferring to their new home, Ted and the others soon found themselves being instructed in the art of parachuting by the RAF Parachute Jump Instructors (PJIs). In a short time, Ted had progressed to become an Instructor himself and also undertook experimental jumps and testing out new types of parachute. Still a young man, Ted celebrated his 21st birthday at Ringway.

It was during his time at Ringway that he met his future wife. On visiting a injured recruit from Ted's squad who had been confined to his billet he met Mary. They married shortly afterwards at Heaton Moor, Cheshire on 14 June 1941.

When the majority of 1st Airborne Division returned to the UK in December 1943, the 2nd Battalion was billeted in the Lincolnshire area north of Grantham. It was here that Ted took over as Company Sergeant Major (CSM) for A Company, based at Easton Hall (now just off the A1). His wife Mary relates how Ted would very often send the Company Clerk, Lance Corporal Peter Badger round to their little cottage with a message with the barked out command, 'at the double'. Thus Peter Badger would arrive at the front door and deliver the message whilst still doubling on the spot, if Mary told him to stop he would reply: "I can’t Mrs Dent, the CSM said double, so I have to double!"

After participating in months of training and several aborted Operations to North West Europe in the Spring and Summer of 1944, Ted was taken ill and admitted to hospital in mid-September 1944. He consequently missed Op Market Garden to Arnhem. His place as Acting CSM was taken by the Senior Sergeant in the Company, Dennis Meads, who was killed at Arnhem Bridge.

After the remnants of the Battalion returned to the UK from Arnhem, the Battalion moved to Ashwell Camp, Oakham in Leicestershire. Ted had an instrumental role in the reformation of the Battalion - an arduous and a demanding task. Ted saw none of the men from his company come back and only 16 men of the battalion of 520 that had left only two weeks before. He was tasked with the integration of the soldiers who remained from the 'old' Battalion, with men from 10th Parachute Battalion (who were merged with the 2nd Battalion) and fresh recruits. Once this exercise had been completed he took on the role of CSM of B Company.

Later in 1945, Ted transferred to 5th Parachute Brigade Defence Company serving under Cpt Dennis Rendell (himself a former member of 2nd Battalion) in the Far East from August to December 1945. Acting Major Rendell wrote the following testimonial to CSM Dent in December 1945:

The above named Warrant Officer joined The Parachute Regiment when it was first formed and served in the campaigns of North Africa, Sicily and Italy. He has been my C.S.M. for four months, during which time I have found him to be all that could be desired as a personal assistant in the administration of my Company and the application of discipline.

He is unswerving in his loyalty and devotion to duty and I feel a personal loss at his leaving my command.

When he returned to the UK in 1946, he was posted to the Parachute Regiment Reserve Battalion on the Isle Of Wight, before being deployed to Palestine as part of the draft sent in November 1946. Ted was the CSM for the draft along with two Officers, one SNCO, 7 L/Cpl’s and 80 Other Ranks. He soon rejoined 2nd Battalion as CSM of A Coy, upon arrival in Palestine.

In November 1947 the Battalion amalgamated with the 3rd Bn to form the 2nd/3rd Bn and he returned with them to the UK in 1948.

After he retired from the Army he joined the Ministry Of Defence Police based at Farnborough serving with them for over 20 years. He was an active member of the veterans community and became a founder member of the Aldershot Parachute Regiment Association Branch. He also served as Branch Chairman.

Ted died aged 88 years old in the Phyliss Tuckwell Hospice with his family by his side in May 2008. His funeral service was held in the Royal Garrison Church, Aldershot on 16 June 2008. 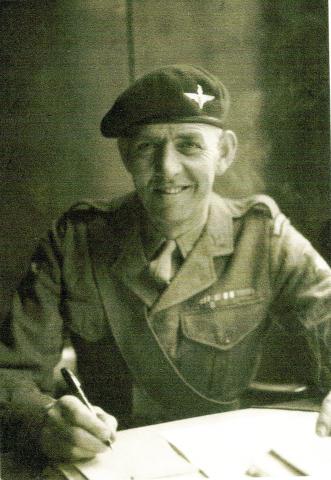