Edmunds’s family were land owners in Polish Lithuania. His father was murdered by the Bolsheviks most likely because he would not give in to their demands to relinquish his holdings to them.

It is believed that the early picture of Edmund may be a graduation picture from a military academy. I also believe that he was an officer in the cavalry as indicated on the reverse of the photo. It is believe his rank is pictured on the epaulettes but I can’t make it out.

WWII Edmund was captured by the Russians and sent to Siberia. Due to his family’s previous experience with Bolsheviks, It is thought that he may have taken steps to relinquish any semblance of officer rank.

Subsequently he was released through Palestine and joined up with the 1st Independent Polish Parachute Battalion. He trained in Scotland and England. He was dropped into Driel as part of operation Market Garden where he suffered a minor wound but remained with the forces fighting into Germany and as part of the occupying forces.

Edmund was discharged 7 May 1947. His rank at this time was Platoon Sgt. His discharge papers are attached.

As part of the resettlement project my father married now with a son immigrated to Canada where he bought a farm in Ontario. 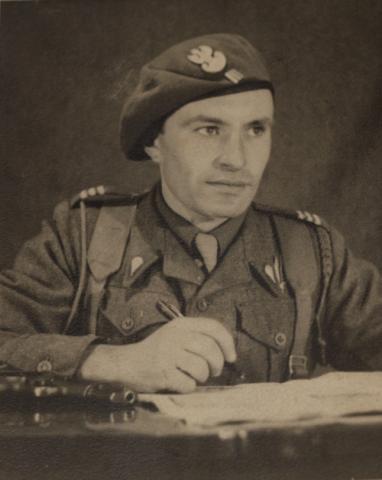