Dudley Richard Pearson was serving in the 2nd Battalion, The Royal Sussex Regiment, in Egypt in early 1943, when he decided to volunteer for airborne forces at the age of 30.

After the selection process he was posted to the 10th Parachute Battalion and then attended Parachute Training Course 25 which ran through the first ten days of March 1943 at Ramat David in Palestine.

He saw service in Italy from September to December 1943, before returning with the 10th Para Bn to England.

By September 1943 he was the Platoon Sergeant of the Signals Platoon and the Regimental Signals Officer was Lieutenant John Clarke.

They both saw action in Operation Market Garden, as part of the 1st British Airborne Division's assault to capture the Rhine crossings at Arnhem, and parachuted onto DZ Y on Monday, 18 September 1944.

Dudley Pearson was discharged from Regular Army service on the 6 November 1945.

Compiled by Bob Hilton with the assistance of David Pearson 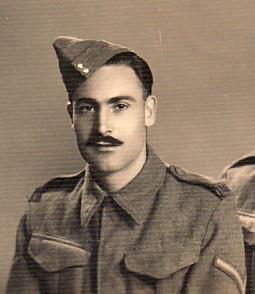