Douglas Baines enlisted into the West Yorkshire Regiment on the 4th February 1943. He volunteered for Airborne Forces soon after the completion of his training and was sent to Hardwick Hall, where he successfully completed, and passed the selection process.

He went on parachute course 80 at RAF Ringway, 30th August to 9th September 1943. He completed eight descents and was posted to PORTON. His instructors comments: “Has made good progress, keen, confident, jumped well”. Later he was posted to the 12th (Yorkshire) Parachute Battalion, as it was in the process of forming up.

After parachuting into France, Baines was captured and became a PoW He made a heroic escape from a PoW train in late july with 5 others and rejoined his battalion.

Pte Baines was wounded when his glider was shot down over the Ardennes in a later operation. He was discharged on the 2nd January 1946.

The Paratrooper hacked his way to freedom

The following article appeared in a magazine in the late 1980’s. ‘THE PARATROOPER HACKED HIS WAY TO FREEDOM’. 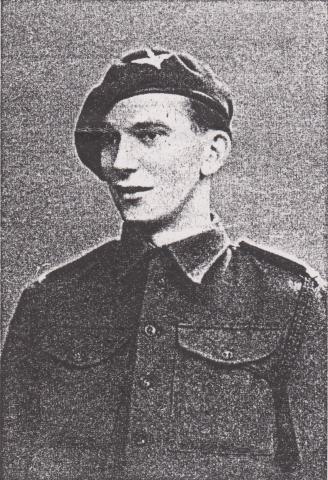