I was born in Folkestone, Kent, and worked at Hawker Siddeley Aviation until aged 18. I then joined the Hampshire Regt in l942, transferred to the Devons, and went to Italy in l943.

I transferred to 2/6th Queen's Royal Regiment in January 1944, and saw action at the Gustav Line, and then Anzio. The battalion returned to Egypt for reorganization in June 1944 and went back to Italy in October 1944.

I later volunteered for the Parachute Regiment and went to the Parachute Training Centre, at Lido de Roma, in January 1945 and passed out in April.  I was then posted to the Independent Platoon. 2nd Para Bde in May and returned to the UK in June l945.

We were kitted out for the Far East, but when the Atomic Bomb was dropped and Japan surrendered, we were sent to Palestine instead. The Independent Platoon was disbanded, and I went to "A" Coy, 4 Para. I served at Gaza, Rehovoth, Sarafand, and Lydda Airport. Being at last in a settled unit, I rose rapidly to the rank of Sergeant. Our duties in Palestine were cordon and search, road blocks, and patrols.

I returned to UK, on a class B Release in October 1946 and joined the Metrpolitan Police. 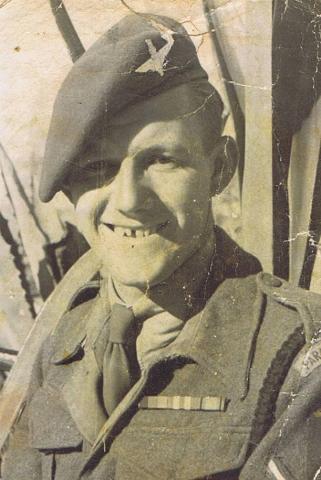