Dilip and his brother, Denis Dey, passed out from The Parachute Regiment and Airborne Forces Depot in Platoon 460, together with another pair of brothers, Dave and Tony Kempster who went to 3 PARA.

Dilip and Denis went to 2 PARA, and after completing the residential tour in Northern Ireland went on to serve in the Falklands campaign.

Dilip served in Corporal Hardman's No 2 section in 2 Platoon, A Company, during the Battle of Darwin Hill and Goose Green.

During the battle he was part of an ad hoc assault group formed to secure a ridge dominating a gorse gully in which A Company was pinned down. There were several casualties during this assault including Corporal Hardman who was killed. 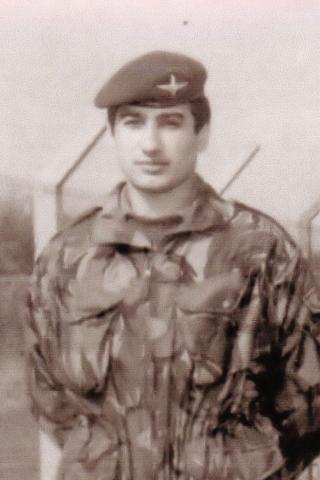 Bill Bentley said:
I have read Dilip Dey's very fitting comments about 'Chuck Hardman' and can only say: 'Pot calling kettle!'
Dilip was himself an exceptional soldier and obviously learned very quickly from his mentor. Not every brave man won a medal.
winker watson said:
Well, Well, Well.
What can a man say about Dilip Dey?
A brave man ?
A valliant man?
A courageous man?
A gallant man ?
A great soldier ?
A man of honour ?
A true friend ?
Yes, all of these attributes and more, as many will attest.
Live long and prosper.
Geoff Chater said:
Joining Dil at Sutton Coldfield was one of the reasons for me joining the Parachute Regiment. We followed each other in to 460 platoon, then in to "A" Company 2 PARA after passing out. I totally agree with the comments made by Winker but most of all a real great friend.
Add your comment