Derek Preston, the son of William and Ethel Mary Preston, Bingley, Yorkshire, enlisted into the General Service Corps and volunteered for airborne forces in 1945.

L/Cpl Preston died aged 20 years in Palestine on 25 October 1947 when the lorry he was travelling in collided with another military vehicle. He is now buried in Khayat Beach War Cemetery, Israel.

NB Pte Woodward who died in the same accident was also on course B184. 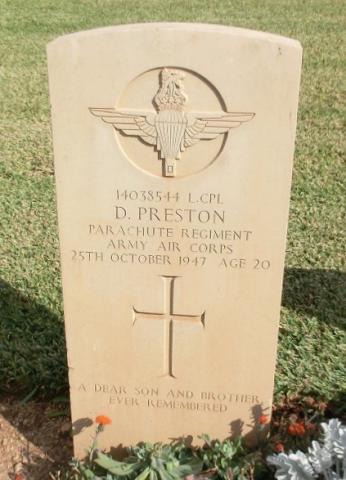 Natalie Fairlie said:
So young, such a waste of young lives, when they were out in Palestine to help with the situation. Reassuring that my uncle was buried and is still with, his good friends and comrades.
Add your comment