Denzil (Denny) Meyer Keen, son of John and Elizabeth Keen, of Maida Vale, London, enlisted in The East Kent Regiment (The Buffs) whilst only 17 and later volunteered for airborne forces.

Pte Keen was badly wounded in woods near Oosterbeek trying to destroy a German tank. He was brought back to be evacuated to the Regimental Aid Post and laid across the front of the Colonel’s jeep, but as it pulled away the jeep received a direct hit from a tank and the occupants were all killed. Pte 'Denny' Keen was killed in action on 19 September 1944, aged 20. He has no known grave and is commemorated on the Groesbeek Memorial.

The above account was given to the family by a close friend of Denny's, Sgt Ron Pang, who served with him in 10th Para before being posted to the Far East with 11 Para. He obtained the information from three of Denny's friends, John Stillwell of A Coy who was wounded and captured at Arnhem, Ernie Whadcoat also captured at Arnhem, and Tom Harding wounded and captured at Arnhem. He was also told that just before leaving for Arnhem, all the Jewish men attended a service with the Jewish Chaplain, and were told that as they had seen active service in North Africa, they were given the option of not going in with the first drop. They all said at once that they would go in with their comrades, and when this became common knowledge, the whole battalion were very impressed. 'Denny' was described by this informant as a “tall fellow, well built, got on well with everybody, a bloody good mate”. (extracts from a brochure by AJEX (Association of Jewish Ex Servicemen)).

If you are part of Pte Keen’s family and would like to complete this biography, you can apply to the curator to do so. To do this you will need to become a member of ParaData and select the 'friend or family member' option on the registration form. If you would like to find out more about becoming a member please visit our registration page.

By Rod Gibson with additional information from his Niece, Alexandra Dembitz 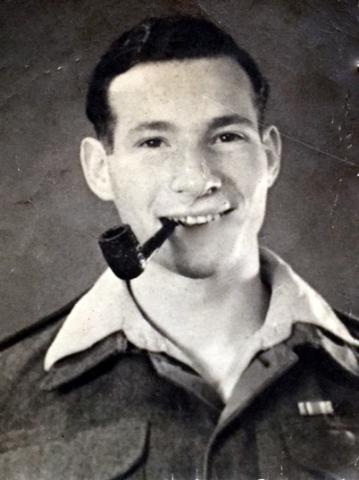