Dennis Ronald Povey, son of Frederick and Elsie May Povey of Nechells Birmingham, enlisted into the General Service Corps before being posted to The King’s Shropshire Light Infantry.

Private Povey volunteered for airborne forces in in July 1944 and qualified as a military parachutist at RAF Ringway on course 126 which ran from 24 July to 4 August 1944. He was then posted to A Company, 13th (Lancashire) Parachute Battalion.

Pte Povey took part in the heavy winter fighting at Ardennes, known as the Battle of the Bulge and was killed in action on 4 January 1945 aged 19 years old.

He is now buried at Hotton War Cemetery, Luxembourg. 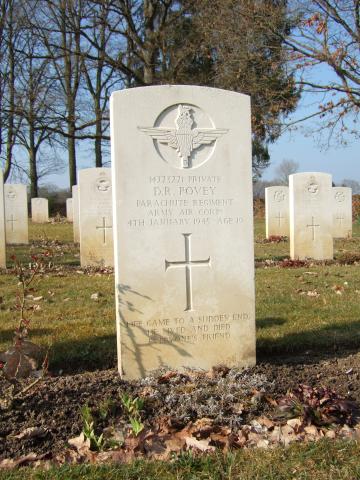