Dennis Rendell enlisted into the Middlesex Regiment (Duke of Cornwall’s Own) early in the Second World War.

In September 1941 he was one of the earliest volunteers for airborne forces and after his selection training at Hardwick Hall he was posted to the 2nd Parachute Battalion and then sent on No 3 Parachute Course to RAF Ringway. This was the third course of training parachutists for the 2nd and 3rd Battalions of the 1st Parachute Brigade and it commenced on 5 December and was completed on 13 December 1941. The course comprised of 7 Officers and 235 men of the 2nd & 3rd battalion’s, under the overall command of Major G Rothery of the 3rd Battalion. Second Lieutenant Dennis Rendell was in charge of the 2nd Battalion contingent.

Dennis and the rest of the battalion spent a year preparing for operations and finally in mid 1942 the 1st Parachute Brigade was warned off for overseas service.

Lieutenant Dennis Rendell relates some details of one the men in his platoon;

‘Lofty’ O’Connor was an original Middlesex Regiment volunteer who joined the 2nd Para Bn on the 10th September 1941. He was in my No 1 Platoon and was always in trouble, spent a good deal of time on ‘jankers’ (punishment for minor offences), but never the less a very good and highly skilled soldier.’

The Battalion docked at Algiers, on 12 November, and were eventually billeted at Maison Cairee. The task on arrival in North Africa was to be in reserve ready to go on any “snap” operation, which the First Army considered necessary according to the progress of the campaign.

Finally on 29 November 1942 the battalion set off for its first action as a complete unit. Their mission was the capture of the airfield and major road network in the area of Depienne. This would be in co-operation with a major offensive by 1st Army.

Lt Rendell jumped in with No 1 Platoon, landing near Oudna. He reached the airstrip with his section without encountering any enemy soldiers, but having become separated from part of the section, Lt Rendell returned with his men to the main body.

The Company set off to join up with the Commanding Officer (CO) and rest of the battalion at a farm called El Fedja. Whilst there, Lt Rendell was wounded by gammon bombs and taken prisoner.

Lt Rendell was treated for his wounds and then flown to Italy where he was sent to a Prisoner of War (PoW) camp. During the very confused situation that emerged from the Italian surrender, in September 1943, Lt Rendell and other officers made good their escape. Instead of making his way straight back to the Allied lines he decided to help with the escape line and organisation around the Rome area.

Whilst there, Lt Rendell and other escaped PoW’s attended a travelling fair, where he found himself mixing with German soldiers. One of the attractions was a shooting range that took a photograph when the target was hit, and Lt Rendell managed to do so, obtaining a photograph of himself flanked by two German soldiers, oblivious to his PoW status.

Lt Rendell returned to the UK in July 1944, and missed taking part in Operation Market Garden, as he returned from leave ten days after the operation began.

The remnants of the battalion and the 1st Seaborne Echelon returned to Stoke Rochford in October. Along with the Senior Non Commissioned Officers (SNCO's) of the battalion it was Lt Rendell’s job to re-organise the residues of the 2nd and 10th Battalions into a cohesive unit. He was promoted to Captain and in January 1945 he took over as Second In Command of B Company. In late June 1945 a composite company was formed from the 2nd Parachute Battalion to provide the Defence Company for the 5th Parachute Brigade, which was being deployed to the Far East. Captain Rendell was selected as one of the company officers, deploying with them in July 1945.

Whilst deployed to the Far East, Capt Rendell was posted to the 13th Parachute Battalion to take command of A Company. The operation they were preparing for, a parachute assault to retake Malaya, was brought to an abrupt halt by the Atomic bombs being dropped in August 1945. Sometime in 1945 he was posted to the 13th Parachute Battalion as a Company Commander, where he served for a year until the battalion was sent to Palestine and disbanded.

On return from the Far and Middle East he decided to join the Military Police and served with them for twenty years, rising to the rank of Brigadier.

He was awarded a Military Cross for actions in North Africa, posted in the London Gazette on 22 March 1945. He was also awarded an MBE for escaping, following capture in December 1942 with 2nd Para Bn in North Africa.

In 1947 he married Mary Armes, with whom he had two children.

He served with 1 Bn the Middlesex Regiment until 1951, joining the War Office and then the Corps of Military Police in 1954.

He became CO of Provost Company,HQ 1st (British) Corps, in Germany in 1956, moving later to Edinburgh.

He served as Chief Instructor, RMP, later Commandant, and then as Provost Marshal with the British Army of the Rhine until 1974. He became Provost Marshal and Head of the Corps of Military Police 1974, and in 1975 was ADC to the Queen.

He died peacefully on 22 September 2010 after an illness borne with great fortitude.

To read a personal account of his actions in Oudna, 1942, please see the article below.

A personal account of Lt Rendell’s part in the capture of the airfield at Depienne, written in 1990.

‘I think we must have been following Bn HQ planes, I remember being briefed to jump when the CO jumped. 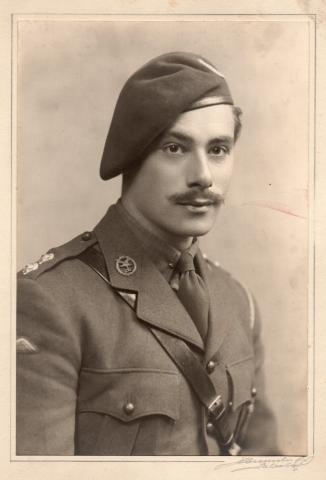