Sergeant Denis Basil Martin came from Hornsey Rise in North London, the son of George and Jemima Martin. He served with the London Irish Rifles before joining the 21st Independent Parachute Company – a Pathfinder unit. ‘Rape’ as he was known amongst his comrades was one of the first twenty or so men to be selected for the Pathfinders. He qualified as a parachutist at Ringway on course number 27 in September 1942.

Though extremely well built and tough, he was quiet and unassuming and a much liked comrade. He served with the Company in North Africa, Italy and in Holland during Op Market Garden. Denis was a Section Sergeant in No. 3 Platoon and was killed near the Ommershof House at Oosterbeek on 20 September 1944.

This short profile is mainly based on the work of “Leading the Way to Arnhem” (ISBN 979-90-812703-1-1) with the kind permission of the authors (Peter Gijbels and David Truesdale) and publisher (Robert Sigmond). This book is based on the Fred Weatherly Files, Official Records and Personal Accounts of Members of the Company. 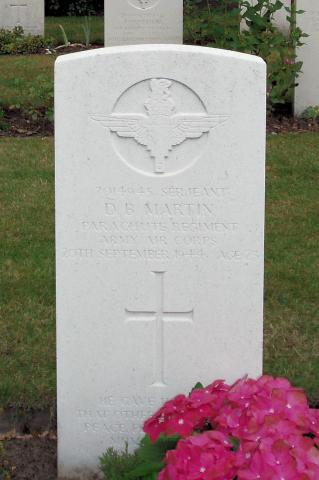