Denis Bernard Frank Raggett was born in Lambeth in 1920, the son of Ernest Walter and Effie Eugenie Raggett (nee Westmoreland).

Sgt Raggett, by now living in Bristol initially enlisted with the Devonshire Regiment, before volunteering for the Airborne Forces where he trained as a Glider Pilot serving with 20 Flight, B Squadron of the 1st Wing. In September 1944, he went on to take part in the Battle of Arnhem, during Op Market Garden.

Flying Glider Chalk Number 311, he took off from RAF Manston on the 17 September as part of the First Lift alongside Staff Sgt R W Watt.

After digging in around the Landing Zone following a successful landing later that morning, 20 Flight moved off in support of the 2nd Battalion South Staffordshire Regiment, who had been instructed to advance into Arnhem to support the Battalions of the 1st Parachute Brigade.

After meeting heavy enemy opposition, the Glider Pilots of 20 Flight where instructed at 03.30 on the 19 September to return to Divisional HQ, by now set up at the Hartestein Hotel at Oosterbeek. Here they spent the next day digging in around the tree line surrounding the grounds of the hotel.

On the morning of 20 September, the area occupied by these Glider Pilots came under severe mortar fire, resulting in the death of Sgt Denis Raggett and Sgt Dennis Andrews. Staff Sgt R W Watt, was wounded in the same attack that killed Denis Raggett, and having being treated at the MDS, became a Prisoner of War and was interred in Stalag XI-B at Fallingbostel.

Sergeant Raggett died on 20 September 1944, aged 24 years old. Both Sgts Raggett and Andrews were given field burials later that day in the grounds of the Hartestein Hotel, before being later re-interred in the Arnhem Oosterbeek War Cemetery. 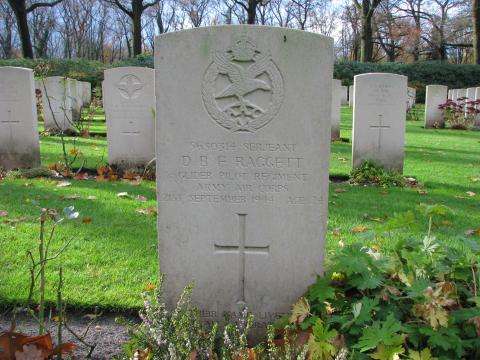