David 'Rocky' Rowlands Joined the army in August 1980. He initially served with The Welsh Guards and deployed with them in 1982 Falklands War, after which he was awarded the South Atlantic Star with rosette.  He served a total of five tours of N Irelands including an 18-month residential tour in Belfast.

Having completed all arms P Company and depot training week 6 onwards, David joined 2 Para in January 1985 in Crossmaglen in South Armagh serving with 3 platoons A Coy. In 1987 he was promoted and joined B Company 6 Platoon.  Whilst with A & B company Rocky Rowlands served in Belize, Kenya, Italy,  Australia, Jamaica, Canada, USA, and Egypt.  He trained a team to compete in the Swiss Commando competition on three occasions and represented 2 Para in the Army boxing championship under the training of Toni Inglis (2 Para boxing coach).

He then served with ATR Lichfield as the training sergeant from 1998 to 2002. ATR Lichfiled was then the training depot for The Para Reg. (phase 1 training).

David finished his military career in 2002. In 2003 he joined the newly formed MPGS (Military Provost Guard Service) serving at Chilwell Barracks in Nottingham and in 2005 RAF Valley. In 2025 he was medically discharged from the army having served a total of 34 years.  He is married to his wife Linda and he has one son David-Alexander Rowlands. They live in Holyhead, Anglesey North Wales. 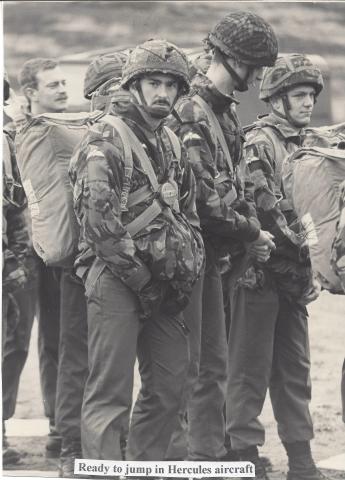