Dave Newell was the youngest of three brothers that all served in The Parachute Regiment during World War Two. James served in the 12th Battalion and his eldest brother, Harry , was killed in action with the 4th Battalion.

Dave initially joined the Northamptonshire Regiment in 1942 and then volunteered for airborne forces in 1943. He qualified as a military parachutist on course 79, which ran at RAF Ringway from 23 August to 2 September 1943.

Upon completion, he was posted to the 8th (Midlands) Parachute Battalion and served in A Company, 1 Platoon, under the command of Major S Terrell and Lieutenant GR Whitely respectively.

He took part in the Normandy, Ardennes and Rhine Crossing campaigns and later recalled in a letter to the Pegasus Journal:

“On June 6th 1944 ‘D’ Day, the plane I was in was hit just as we passed over the coast of France, it was then a case of following the pilot’s instructions, and abandoning the aircraft. The night that followed for me was full of incidents but I did eventually find some paratroops digging in on the outskirts of a village. I was challenged for the password (‘Punch and Judy’) and then told they were the 12 Bn 5 Para Brigade, and that I was close to Ranville. My first reaction to this was to ask about my brother, Jim. Whilst word was being passed around the trenches I was allocated a place to dig in. It wasn’t long before Jim came up to me. ‘Hey up young Dave, he said with a smile on his face.This was always his familiar greeting to me whenever we met. ‘What’s tha doing here?’ It was I must admit an amazing coincidence, seeing that we should have been miles apart, but it was good to see him. I couldn’t stay too long at Ranville as efforts had to be made to get through to my own Bn, the 8th, at Bois de Bavent. In the months that followed I did occasionally see Jim, once in the Ardennes, after the Rhine drop and also when he came to see me back at Tilshead- but the time we met in Normandy will always be in my heart.”

After the war Dave Newell also saw service in Palestine and was discharged from the Army in June 1947. 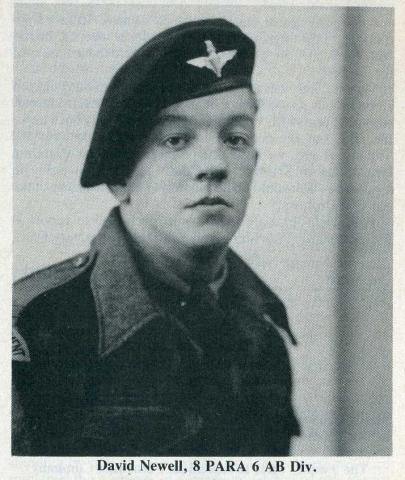